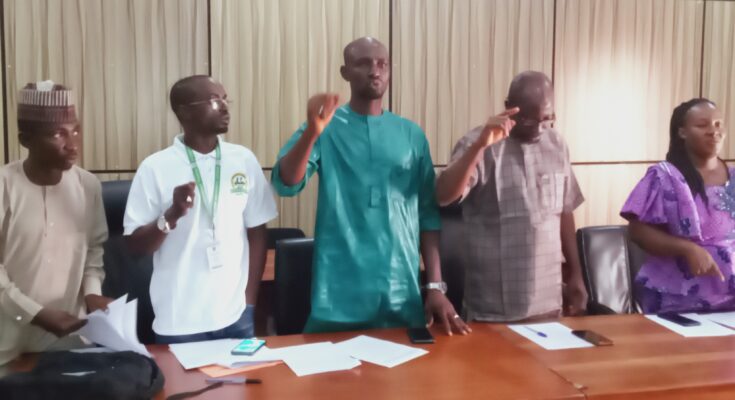 Senior Staff Association of Nigerian Universities (SSANU) of the Federal University Lokoja has called National University Commission (NUC) to give directive to stop usurpation of headship positions of the non-teaching by the teaching counterparts.

The Chairman of SSANU, Federal University Lokoja chapter, Comrade Adedeji Kazzeem made the call during a press conference held at the institution.

He stated that correction of usurpation of headship position on non-teaching jobs by the teaching staff is necessary stressing that federal government should pay promotion arrears of Univarsity staff for 2018 balance, 2019, 2020 and 2021 and implementation of 2021 promotion.

According to him, federal government should also pay the omitted members in the payment of minimum wage arrears.

“Personnel Budget of the Universities should be adequately funded to cater for salary shortfalls in the Universities, government should pay backlogs of there salaries on compassionate ground and also pay third party deductions for the months of October and November 2022, as a matter of urgency.

He also called on govenerment to make public the results of tests carried out on U3PS, IPPIS and UTAS and adoption of the best payment system for the universities.

The SSANU in it recommendation to the smooth academic running of the University, called for the reconstitution of the renegotiation committee to include SSANU and NASU representatives and to continue the negotiations of 2009 agreement

SSANU also asked that the Federal Government Joint Committee on the peculiarities of University on IPPIS should include the representatives of all University based unions.