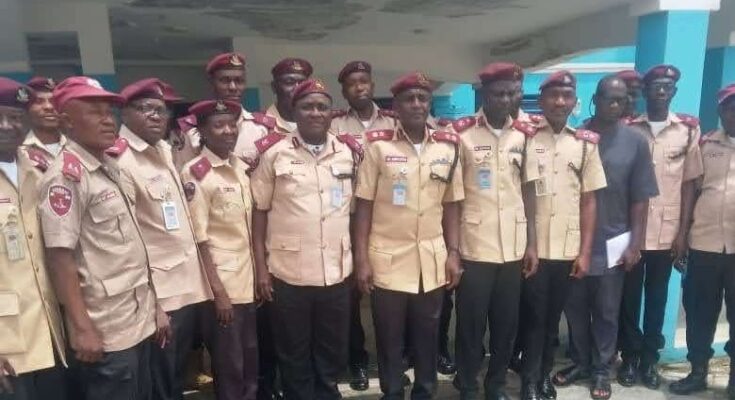 The Kogi Sector Command of the Federal Road Safety Corps(FRSC), held its 3rd quarter 2022 Retreat for Heads of Operations towards achieving better services during the ember months.

The Workshop tagged “Digitising Enforcement in RS8.3 Kogi Sector” which was held on Thursday was aimed at ensuring smooth operations of the officers to enhance productivity and effective performance.

The Kogi Sector Commander of the FRSC, CC Stephen Dawulung while declaring the workshop open, charged operational officers on dedication to their duty.

The Sector Commander described the operational unit as very critical and lifewire of the command to deliver on its constitutional mandate.

According to him “We see the operational unit on road as our first line officers and in that case we have to be mindful of the way they conduct themselves while on duty.

CC Dawulung therefore, urged the benefitting officers to take the training very serious and ensure that they implement what they learnt on their duty places.

He also charged the operational officers to ensure free flow of vehicles on all public highways across the state during the ember months.

In his welcome address, Spokesman of the Heads of Operations, DCC Rawifu Adeyemo said that the retreat is an appraisal of their performances with a view to assessing areas of progress made and challenges, inorder to pave way for greater improvement on the job.

He enumerated some of their mandates that needed proper enlightenment to include; checking of motorists for enquiries about their vehicle documents, confistication of vehicles that lacked necessary particulars and arrest of defaulters who should be handed over to the police for prosecution.

Highpoint of the workshop was paper presentation on “Appreciation of the E-tablet as an effective device for Operational Enforcement in RS8.3 Kogi Sector”