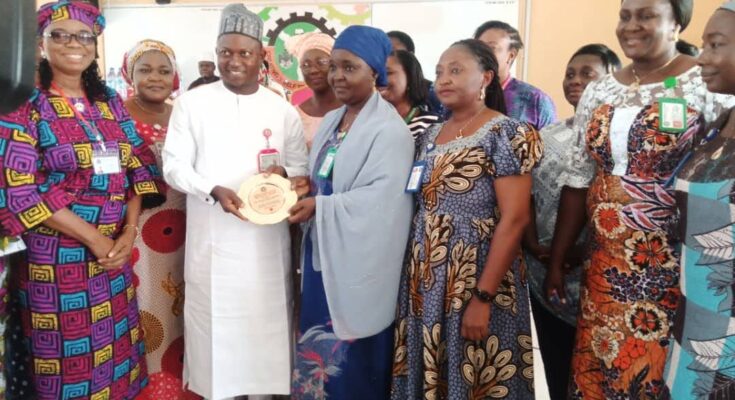 The Rector of Kogi State Polytechnic, Lokoja, Dr. Salisu Usman Ogbo, has been honoured with Women in Leadership as he
warned lecturers to desist from selling textbooks and handouts to students.

The Rector who was honoured by Women in Leadership positions in Kogi State Polytechnic Lokoja him for his outstanding achievement for the institution in the last one year gave the warning.

He noted that selling of handout and text books to students is not accepted in the institution stressing that some lecturers of the institution are already having crushes over the issue.

He noted that lecturers in other kogi state owned instructions never sold handout and text books to there students and he wandered why some the lectureres in Kogi State Polytechnic are trying to make difficult for the students.

Describing Dr Ogbo as a gender friendly and destabilized leader the Women who presented Gender sensitive leadership award to Dr Ogbo prayed that his tenure will continue to yield fruits for the people of Kogi State and Nigeria in general.

In her address, the Dean, School of General Studies Mrs Balagbogbo while appreciating the Rector for his exemplary leadership said Dr Ogbo is a firm believer of gender equality like Governor Yahaya Bello.

According to her, under the current leadership, their have been massive infrastructural development as Dr Obo remains a Man of good conduct and a peace builder in the Polytechnic.

She further described Dr Ogbo as quintessential leader adding that it is on record that under the Reactor mentorship, Women have been sense of belonging since the history of the Polytechnic

She also saluted the doggedness of the Rector in achieving this great feat within a shortest period of time.

Adding her voice, the Director Academic planning unit Mrs Ruth Haruna said Women in the Polytechnic will continue to appreciate the ICT driven Rector who in the history of the institution has changed the face of the Polytechnic to an enviable height.

According to her, they are not here to protest but to applaud the Rector remarkable achievement adding that Dr Ogbo is a man of discipline.

The Polytechnic Librarian Mrs Omolola Audu while acknowledging the contribution of the leadership of the Polytechnic h thanked Dr Ogbo for identifying with Women.

” We thank God for this adage that says when you train a woman you train a nation. We have never have things good in the Polytechnic since I came to Kogi Polytechnic in 2000. Dr Salisu Ogbo change everything for us. God will never forsake you sir for your contributions to humanity”

In his acceptance speech, the Rector Kogi State Polytechnic, Dr Salisu Usman Ogbo described the day as historic adding that, this will encourage him to do more for the institution.

He appreciated the role of his Mother to the feat he has achieved so far, noting that, Women remains the bedrock of any nation.

It is however on record that since Governor Bello appointed Dr Salisu Usman Ogbo, in 2020, Kogi State Polytechnic now have six female Heads of Department, six Female Deans.