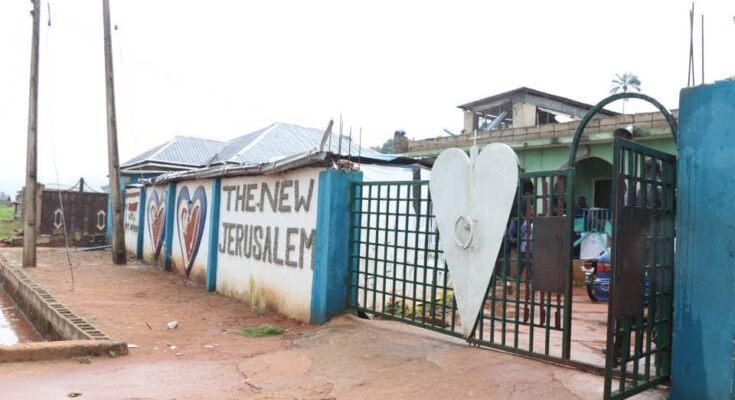 A number of people, mainly young women who claimed they came for prayer and had been spent months at the place, including others mentally unstable placed under chains were moved out of the prayer house at the time it was sealed this afternoon.

Pastor of the church, Adeiza Peter is being investigated by the Police for some criminal activities ranging from fraud, use of his prayer house for medical quackery, by taking deliveries and also running a psychiatric services even when it has been discovered he has no medical training.

It was gathered that a number of deaths have been recorded at the prayer house, including pregnant women and others suffering from various ailments, after charging their relatives huge sum of money.

His supposed assistant, Eneji Seidu, from Adogo, Ajaokuta Local Government Area of Kogi State, said the Pastor who was a musical artist before he received a call to be a Pastor has been his close friend, noting that he is a true man of God who have been called to help those in need.

He admitted that people receives medical attention at the Church, but denied knowledge of deaths of sick people at the prayer house, saying God had used the Pastor to heal many who comes with challenges.

Speaking with newsmen, Commissioner for Information and Communication, Kingsley Fanwo, said the Governor had directed the place be sealed up following the discovery of ungodly activities by the Pastor.

He described the acts of the Pastor as fraudulent, saying his hypnotised members would be rehabilitated and reintegrated with their families, noting that there would serious sensitisation for people to desist from patronising quacks while assessing healthcare.

On his part , Commissioner for Health, Dr Zakari Usman, said the Pastor does not have any medical training, but regrettably taking deliveries and transfusing blood, as well as keeping people with mental illness, and extorting money from them under the guise of spiritual materials.

He said the action was not a witch hunt on the ground of the spiritual activities by the Church, but to carry out the directive of the Governor to seal up the place which was being used for quackery resulting in deaths of pregnant women, babies and others, saying the state government has made huge investment in ensuring healthcare is accessible and affordable to Kogi residents.

TAGKogi Govt seals up Church involved in criminal activities in Okene
Previous PostATTEMPTS TO DISRUPT AND REPRESS PETER OBI SOLIDARITY RALLIES BY THE STATE: A CALL FOR CAUTION AND NATIONAL INTEREST: A PRESS RELEASE OF THE MOSES OISAKEDE LEADERSHIP FOUNDATION Next PostFG Directs VCs To Reopen Varsities, Resume Academic Activities