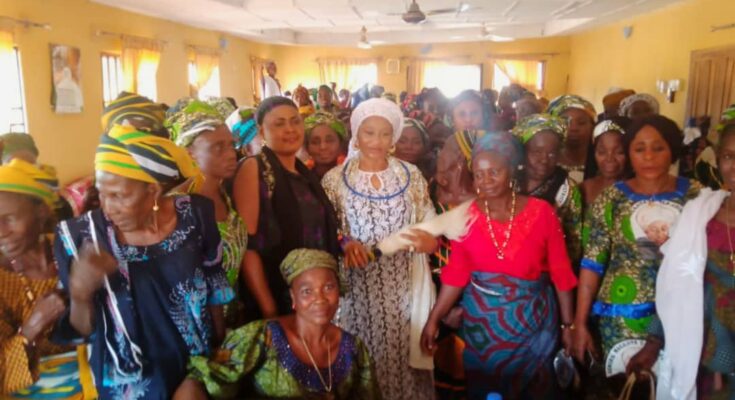 In what was term as a town hall meeting, which later snowballed into an assemblage of diverse women groups, the lye Ebule Jonu of lgala kingdom, Hon Chief Alima G Abuh met with leaders of Women associations and the whole Magajias in Omala local government area, with the main purpose of deliberating on prominent issues as it concerns the progress and development of Omala land.

Speaking during the meeting, the lye Ebule Jonu charged the women to be good ambassadors of their various homes. She advised them to shun acts inimical to the growth of their families and the land in general.

“Though this is not a political gathering but I must confess that I’m sincerely happy for this large turnout. You see, there is every need for peace, love and unity to exist within the women folks for the progress and development of Omala. Apart from government, we can equally initiate projects for the development of our community and we cannot achieve that without coming together as one. So there is every need for us to be united as women,’ she added.

Chief Alima G Abuh sensitized the women folks on the need to collect their Permanent Voters Card as elections are around the corner. She urged them to come out en masse to vote for any credible candidate that have the masses at heart.

The Iye Ebule Jonu thanked the Chairman for his good work since he was saddled with the responsibilities of being the Chief security officer of the local government. She said she was impressed with the premium accorded to culture and tradition in Omala.

She concluded by putting forward the needs of the women and the council Boss in his remarks, promised to do his best to assist the women to actualize their good plans outlined for the betterment of Omala.

It was a joyful moment for the entire women as they said they have never experienced such gathering of this nature before and prayed for the lye Ebule Jonu for the lofty initiative that if maintained will lead to more progress and development of Omala, lgala kingdom, Kogi State and Nigeria as a whole.