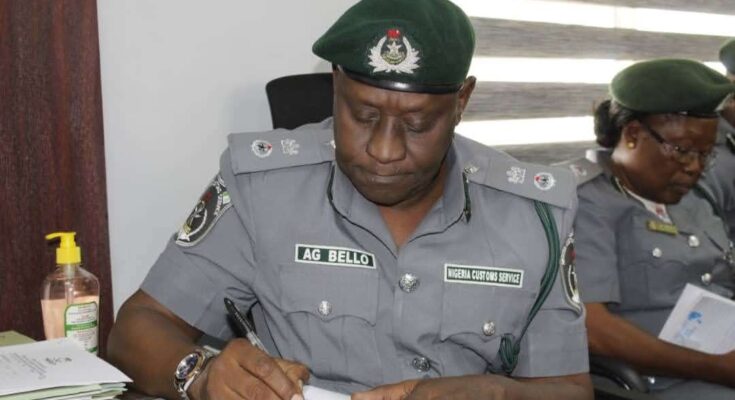 The new Customs Area Controller, Kwara Area Command of the Nigeria Customs Service Compt. Aliyu Gaya Bello has urged all officers to imbibe the culture of transparency and professionalism while discharging their responsibilities

The Public Relations Officer, Kwara Area Command Chado Zakari made this known in a statement issued to newsmen in Ilorin on change of batton at the state command.

The statement reads in part “The Kwara Area Command of the Nigeria Customs Service has a new Customs Area Controller. He is Compt. AG Bello.

Compt. AG Bello who is transferred from Zone A Headquarters, Lagos took over the mantle of leadership of the Command from Compt. HB Ahmed fsi who has been redeployed to Zone D Headquarters, Bauchi in recent deployment of Comptrollers approved by Comptroller General of Customs.

At a brief Handing over ceremony held on Thursday, 18th August 2022 at the Command Headquarters, Ilorin, Kwara State, Compt. HB Ahmed fsi appealed to officers and men of the Command to extend the same support and cooperation he enjoyed to his successor.

In his farewell address, the Compt. HB Ahmed fsi thanked the Comptroller General of Customs and the management team for the opportunity to serve as area controller. He urged officers to accord the incoming controller maximum support to effectively discharge the new responsibility bestowed upon him. He prayed for God’s guidance and intervention for successful tenure.

In his response, Compt. AG Bello told officers at the Command that his intention was to consolidate on the achievements of his predecessor. According to him we have to intensify efforts to collect maximum revenue and suppress smuggling to the barest minimum.

The new Customs Area Controller urged all officers to imbibe the culture of transparency and professionalism while discharging their responsibilities. He also warned that any act of negative conduct among officers would not be tolerated.

The new Customs boss congratulated and commended the out-going CAC for taking the Command to enviable height of Revenue generation and anti smuggling activities. He assured to work assiduously towards consolidating the feat attained by his predecessor, he disclosed that, with the ongoing border drill exercise, the task to effectively secure our land border remains his utmost priority. He solicited for the maximum support and cooperation of the officers and men of the command to effectively manage the affairs of the command towards suppression of smuggling and other trans-border crimes.”