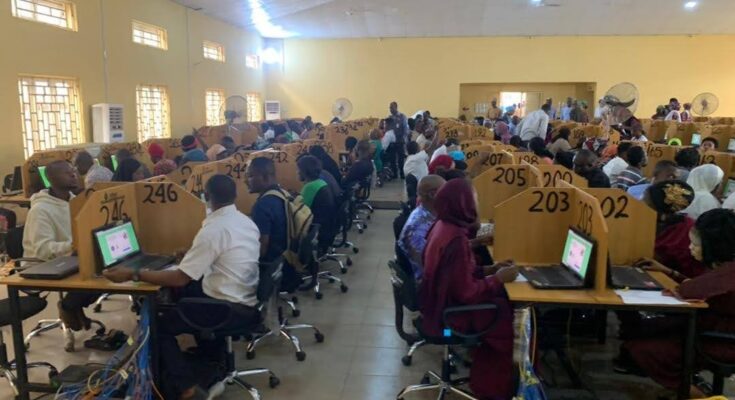 THlhe Kogi State Government on Tuesday, commenced the conduct of aptitude test for shortlisted 6000 candidates shortlisted out of the 15,000 applicants for the ongoing teachers’ recruitment in the state.

He stressed that the exam would be a computer based test, and there would be no room for manipulation, saying, ”it is strictly for people that applied online”.

He urged the candidates to be patient, behave maturely and not unruly but to cooperate with the officials, assuring that every invited candidate would write the test.

The commissioner commended His Excellency, Governor Yahaya Bello for making education a priority in the state.

He further expressed gratitude to the Governor for making efforts to fill the existing vacancies in Kogi schools, stressing that the vacuum had limited the quality of teaching.

He noted that the state government would in the first batch, employ 2000 successful teachers to resume work in the new session, while describing the gesture by the Governor as ”unprecedented’.

He said previous administration had abandoned such responsibility, stressing that the governor’s love for education, necessitated his directive to engage teachers.

He reaffirmed the commitment of the state government to employ qualified teachers which he said remained the bedrock for sustainable education as envisioned by the present administration.

He urged the candidates to put up there best assuring that merit principle would determine the successful candidates.

She eulogised the Governor for the opportunity to fill existing vacancies in Kogi schools.

She said the aptitude test would be conducted in batches, and would hold from Sept. 13 to 15.

Cook said about 6000 candidates out of the 15000 applicants would sit for the test.

One of the candidates, Mr Ayo Thomas, commended Kogi Government for its decision to recruit more teachers in the state.

”I applied as Mathematics teacher, and I believe I will perform well in the aptitude test. We thank the government for the gesture,” Thomas said.