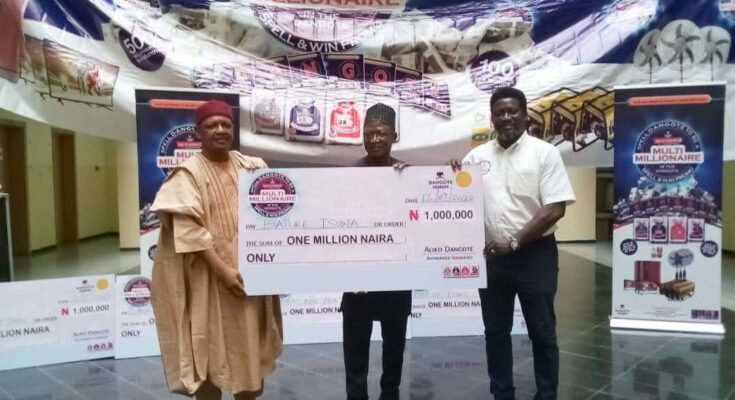 Customers of Dangote Cement are Kings’

Following the emergence of many millionaires from the ongoing Dangote Cement promotion, the company has dressed its customers in royal regalia, describing them as Kings.

Speaking at the presentation of prizes to winners Tuesday in Abuja, Regional Sales Director, George Bankole, said its customers are held in high esteem, adding that one of the aims of the promo is to empower winners who will in turn be able to create more jobs and help ginger the economy.

Mr. Bankole said the ongoing “Bag of Goodies Season 3” National Consumer Promotion by Dangote Cement Plc will see the company give out a whooping N1billion to its customers across the country.

He urged participants and winners to spread the message so that more people could benefit from the new scheme.

According to him, customers and distributors of the product as well as other Nigerians can be millionaires many times over.

He said the promo, initiated by the President/CE, Dangote industries; Aliko Dangote is all about changing the lives of Nigerians, especially with the current economic challenges facing the Country.

The Pan-Africa Cement manufacturer had in July unveiled a Spell Dangote and become Millionaires in a season 3 of it Bag of Goodies National Consumer promo, in Lagos during which the Company announced that 500 consumers would win a million naira each while another 100 would win N5million Naira within four months.

Speaking on behalf of the winners, Bature Isuwa said after receiving his alert he could now confirm to Nigerians that the promo is a reality. He, therefore, called on Nigerians and builders not to miss the rare opportunity presented by Dangote Cement Plc.