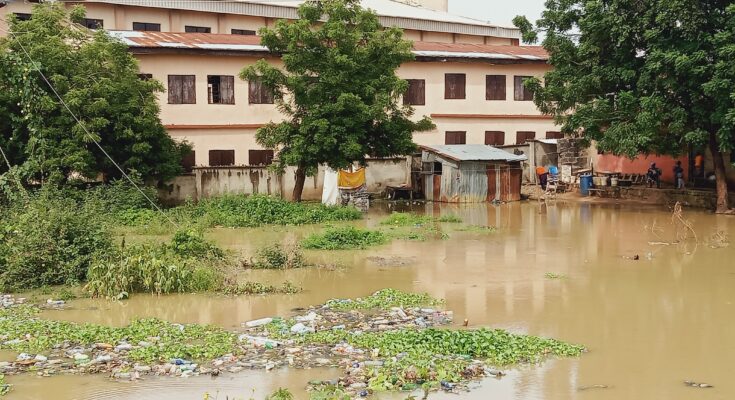 Many people have been rendered homeless in Lokoja the state capital of Kogi state as houses were submerges by flood.

On Sunday it was discovered that one of the major road, old market road and Ganaja-Ajaokuta road have been submerged by River Niger.

Th roads served as link between North Central and Southern part of the country.

Many passengers were stranded while those who could not stay longer sure to the flood had to take canon to cross to the other part of the road and then took commercial motorcycles to the motor park so that they can continue their journey.

At Adakolo Estate and Adankolo Extension, many houses have been deserted by owners as they have moved to safer place.

Some churches were also submerged by River Niger and despite that services were still hold in the church.

Some residents who spoke with our correspondent lamented that they don’t any place to relocate as they still manage to sleep in the flooded house, while others said the have to relocate their family back to the village untill th situation improve.

Meanwhile, the Managing Director Hydroelectric Power Producing Areas Development Commission (HYPPADEC) has appealed to Kogi State government to upscale its awareness and enlightenment campaigns to riverine communities to educate them in strategies to avert or minimise effects of floods.

Managing Director of the Commission, Alhaji Abubakar Sadiq Yelwa, who made the call at the flag-off of distribution of relief materials to flood victims over the weekend in Koton-Karfe said the people needed technical information on the menace.

Yelwa said perennial flooding of the riverine communities with the attendant loss of means if livelihood was assuming an alarming proportion.

He said that since communities were not needing warnings like, “Don’t build on water channels or flood planes, avoid blockage of drainages that can aggravate the effect of flood the best option would be to avail them technical information on his to avert or minimise the natural disaster.

Represented by Alhaji Jimoh Haruna Gabi, Director, Finance and Administration in the Commission, the Managing Director said, “This advice became necessary because of the frequency of this flood in our communities.

“Flood is almost inevitable but we can control it to minimise the level of devastations.

“We have conscientized, we sensitize them over the radio and television, we have jingles reawakening their awareness and the state government has to do more sensitising them with adequate technical information.

“So that if or when the floods come, they can do one or two of these efforts so that they can avert or ameliorate the effect. This is the direction HYPPADEC is going now.

“Today, we have brought in here relief materials that represent a widow’s mite of the commission. It is not as if we can really feed everybody but we have shown kind gesture to everybody.”

The Managing Director however expressed appreciation to Governor Yahaya Bello for always being there for the Commission adding that in all the programmes of HYPPADEC the governor “has never failed us.”

The relief materials include mattresses, rice, millet, beans, noodles, detergents as well as a medical outreach to address diseases and ailments arising from the effects of the flood which has consistently devastated the communities in the last two weeks.