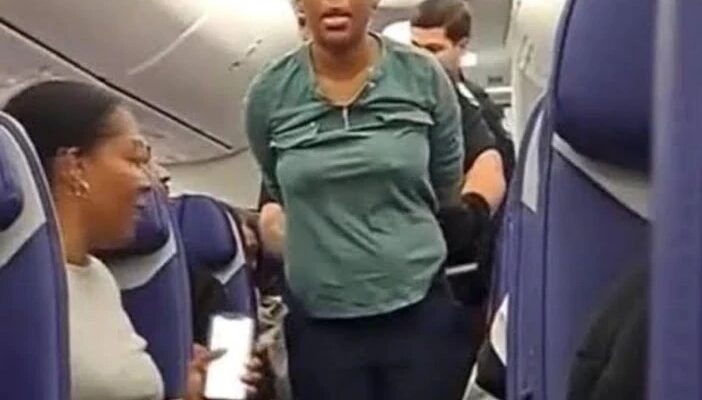 It was confusion aboard a Southwest Airline plane when a crazed woman attempted to open the door mid-air.

The incident which took place on Saturday involved one Elom Agbegninou aboard a flight from Ohio to Texas, in the United States.

It was gathered that the 34-year-old became restless after the flight attendants prevented her from reaching the emergency exit door.

Only God can save Agbegninou now that she tried her best to obey her god.

Elom whose last name is Benin Republic, then started whacking her head on the plane floor, claiming “Jesus told her to fly to Ohio and Jesus told her to open the door,” the documents released by the US District Court for the Eastern District of Arkansas on Monday show.

“They were rushing to the back of the plane to help. I was thinking about the worst case, probably that plane will crash, but I know it’s a very low probability,” passenger Ding Yu told Fox News Digital about the fellow traveler intervening.

The wild disturbance ultimately forced the Southwest flight to make an emergency landing at Bill and Hillary Clinton National Airport in Little Rock around 3:30 p.m. — turning a three-hour trip into a six-hour trek.

Once safely on the ground, Agbegninou was removed by officers while the bite victim was treated with antibiotics and hepatitis shots.

Yu recounts that Agbegninou did not stop her ranting while she was being escorted off the plane.

Speaking to authorities after the incident, Agbegninou reportedly said she left home early Saturday without informing her husband and was hoping to visit a family friend in Maryland.

According to New York Post, she also claimed she “had not flown in a long time” and “became very anxious and normally would not have done those things.”

According to the criminal complaint, Agbegninou is expected to face charges of assault within maritime and territorial jurisdiction and interference with flight crew members and attendants.

It is however not clear if the incident is being investigated by the authorities.
switchnigeria.com