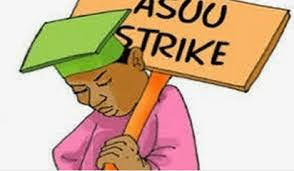 Before the Buffalo soldier strike, before the Academic Staff Union of Universities (ASUU) is annihilated, set aside other conditions for calling off strike, insists only on reasonable pay as an interim measure. Then, when the hurly burly is done, or else if the assailant adopt a separatist tactic the opposing combatant might be overwhelmingly flabbergasted by conquest. After all, Lecturers rubbish themselves by backing Muhammadu Buhari for President in 2015 and 2019.

Tuesday August 2, 2022, 4.55 am in dream I walk towards male students hostel in a University. Two male students were engaged in a fight. The bigger and older male student ran into his room came out with a dagger, held the younger boy, raised him up and brought him face down. He started stabbing him sporadically on his back.

The younger boy lay almost motionless as he has been completely overpowered. Other male students ran into their rooms and started shouting; Hee! Hee! Hee! Only one of the male students stood by watching helplessly. He was scared to touch the boy that was stabbing the other one on the floor.I stood helpless, speechless, and terrified.

In my thinking, if I go near to separate the fight or even attempt to hold back the bigger boy from stabbing his assailant, he might turn on me. But this bigger boy will kill his opponent before any intervention!When I woke up from sleep, the spirit says this is a fight between ASUU and President Muhammadu Buhari led federal government of Nigeria (FGN). All federal government owned tertiary institutions are the property of the federal government and all staff there-in are employees accordingly.

The interpretation of the dream above is that the federal government of Nigeria is capable of stabbing ASUU to death i.e., extinguish ASUU or incapacitate it using Buffalo soldier approach.Before the Buffalo soldier strike, before ASUU is annihilated, set aside other conditions for calling off strike, insists only on reasonable pay as an interim measure.

ASUU demands are too numerous at a goal. Even our students and their guardians are not seeing reason with us. They are getting overwhelmed. Most students do not reason with their Lecturers. Do they bear the burden of their instructors who bequeath the desired precious skill on them?

They want to graduate, they want to be successful professionals, they want to make it in life. The Lecturer must be the bull work. He is destined to labour to earn his reward in heaven if he knows the way there? I recommend prayers to ASUU if their due wages and entitlement is to be given to them because “What gives life is God’s spirit: man’s power is of no use at all” (John 6: 63).

Tuesday January 15, 2019, 11.00 am, Federal University Lokoja, ASUU Chapter met to give situation report on the on-going ASUU strike. When it was time for Any Other Business (AOB), I recommend that we do pray before and after meetings to give God the honour and to achieve result.

The response was that, it was not in the tradition of ASUU to pray.I recommend that ASUU pray for one day and fast only one day or else we will remain stagnant for so long. The response was that they do not have the stamina to fast. However, the matter was put to vote and I was defeated by seventy percent. Then I stood up again and prophesy that, if ASUU don’t go to God we will remain stagnated for so long.

I sat down. Many shouted objection to my last sentence. And here we are today.Since then, the salary of ASUU members continue to dwindle, allowances unpaid, and welfare depreciate. ASUU, please, turn to God Almighty, the creator of all things visible and invisible and you shall testify to his goodness. Your rights and entitlements will be given you. You shall not be swept off your feet by the Buffalo soldier.

Victory shall be your portion by the might and wisdom of Jesus the Christ (Amen). That dagger they are using to stab your back will seize and the Buffalo soldier will surrender.Nigerian government on its part, should respect ASUU and pay them well for they produced most professionals and those who have acquired tertiary academic knowledge. Even for the reason that:We mourn for the dead because they have noaccess to light.

We ought to mourn for fools becausethey have no access to intelligence (Sirach 22:11)Since members of the Academic Staff Union of Universities (ASUU) went on strike on February 14, 2022, some members and some students have suffered and died, some students have withdrawn from school, some female students have decided to give up their education and marry.

Yet, ASUU members are resolute in their request to ensure that the Nigerian government and politicians did not make nonsense University education. But you were used by INEC as Ad-hoc staff in conduct of election to install a wrong ruler.You have the power to do whatever you want with us even though you also are mortal. But do not think that God has abandoned the people of Nigeria.

Just wait God will use his great power to torture the wicked and set us free from the Buffalo soldier.It is true that God is angry with the people of Nigeria by making them suffer because of their sins so as to correct and discipline them. This will only last for a short while, we are still his people. He will forgive us. But our wicked rulers will not escape punishment in the hands of the Almighty God. They will suffer the judgment they deserve. The Buffalo soldier must surrender. I was not born into a Nigeria with miserable leaders and miserable future for its people. I was born into a land full of bright and opportunities for its citizens. Public hospitals was free treatment.

Late Nelson Mandela said:No one with the ability to study and conduct valuable research should be prevented from educationby lack of Money.Whither the age of enlightenment? Shall Nigerians be forever depressed? Whither a united strong and self reliant nation? Whither a just and egalitarian society, all enshrined in the constitution of the Federal Republic of Nigeria since 1960? We are now in a macadamized land of bedbugs, monkeys, tortois, and parasite creatures.

No qualm to say, that except the mass majority of the people of Nigeria aggitate for social order and good governance, little, if any, shall there be political and constitutional reforms. Just as the commoners in France before the 1789, revolution, the commoners in Nigeria knew little about the philosophy of equality. Rather, they are interested in fighting for their own ethnic groups and religious sects prejudice and bias bury the calm of reality.

Sadly, W.W. Rostow (Cambridge University, 1960), in his non – communist manifesto, posits that countries like Nigeria and other African countries are poor, backward and underdeveloped, because they do not produce capital goods, they suffer low income, high level of illiteracy, low standard of living, poor transport system, poor health condition. They also suffer balance of payment (BP) deficit. They are importers and consumers of foreign manufactured goods.

Samson Bako (2000:117), lament that;Contrary to international labour organization (ILO) convention No. 89 and 98 which attaches great importance to the promotion of democracy and workers rights, workers rights in Nigeria have deteriorated since 1997, during the military regim.you are doomed because the Buffalo soldier is leading! You are doomed! Because your leaders, cheat, steal, kill, and destroy. Shall it be from generation to generation?

The harvest (Oil Boom) is over! My heart has been crushed because my people are crushed; I mourn; I am completely dismayed. Is there no medicine (Truth) in Nigeria?Are we still in the military regim? How come that ASUU cannot have the right to work under equitable and satisfactory condition and receive equal pay for equal work as propose by the university Transparency Accountability Solution (UTAS)? Going by the social contract theory, the citizen and the state are held together in a symbiotic relationship.

Whereas the citizen owes allegiance to the state, the state in return shoulders the responsibility of making his life worth living.Who are gun men? Where are they from? What is their mission in Nigeria? Who is their sponsor? They are gradually sipping through Nigeria. Who can withstand them? These questions must be answered by Nigeria’s political leaders whos hands are soiled by the blood of the suffering masses both the living and the dead.

They cannot wash clean the stain of blood in their hands before judgement comes upon them.The missing link in Nigeria’s development is not the absence of democracy but the neglect of history as a factor of development.

The darkage set in from 1979, when the politicians (Agbada people) took over the helms of affairs. All the military juntas who seized power since after then for twenty years (1979 – 1999), failed to attend to the urgent need of Nigeria for security and economic development.