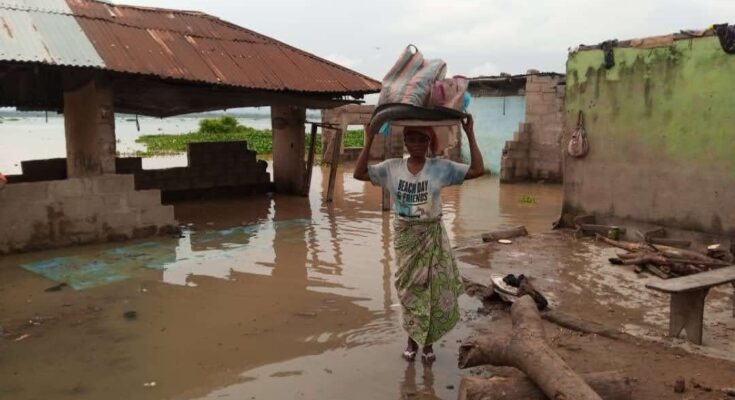 3 year old child, others killed in flood water in Kogi

The President of Ibaji Unity Forum (IUF), Barr. Stephen Uchola, made this known on Tuesday after he led officials of the organisation to visit some affected communities in Ibaji.

According to him at Aniocha in Ojila Ward, a 3-year-old child fell into the river and died. The casualty figure is low because many of our people can swim.

He said that since the outbreak of the devastating flood that has submerged the entire local government and rendered the residents homeless, there had not been any assistance from the government and its agencies for the victims.

Uchola said that many of the victims were in danger of losing their lives as they were sick without drugs, food and shelter.

He added that many had remained trapped in their communities as all the roads in the local government had been taken over by the flooding.

“What we saw at various places we visited has necessitated this urgent call on the various arms of government, non-governmental organizations, philanthropists and donor agencies to come to the aid of the victims.

”They have lost everything to the flood and are battling to survive the disaster.

“We visited some communities on Monday and Tuesday, and will continue on Wednesday to cover the entire ten wards in Ibaji LGA.

He added: ”Dangerous reptiles have taken over the flooded houses and it’s dangerous.

“Six deaths have been reported so far.

“As we speak thousands of them including the children are sick, stranded and eager to leave the area but they cannot do so because the volunteers using wooden boats to evacuate them can’t do much.

”Having lost their source of livelihood they are now helpless and praying for relief assistance especially food, drugs, clothing and shelter.

”If these are not provided urgently, from what we experienced, many will not survive this harsh condition.

“Unfortunately, those already evacuated to Idah town and some neighbouring states are also suffering and are finding it difficult to cope with some of them wearing one dress since they were rescued from their flooded communities some days back.

”Many of them have no place to sleep. Their condition is very pathetic and they are crying for help”.

The forum therefore appealed to the Federal and State Governments for urgent intervention to ameliorate the peoples’ suffering emanated from flooding.

He urged the Federal and Kogi Governments to urgently take necessary steps to rescue thousands of people trapped in different communities in the area due to the ravaging flood disaster.

He noted some members of the organisation and public-spirited individuals had made donations towards assisting the victims.

He, however said that the donations were not enough to alleviate the suffering of the people and mitigate the impact of the disaster on the communities.

“We are sending this Save-Our-Soul message to President Muhammadu Buhari and Governor Yahaya Bello as well as NEMA to come to the rescue of our people.

”These people cannot help themselves under the present circumstances and their survival now depends on support from the government and donors. They should not abandon us in this time of difficulty,” Uchola appealed.

He further appealed to members of the public and kind-hearted individuals willing to assist the victims to do so by coming to the aid of the victims.