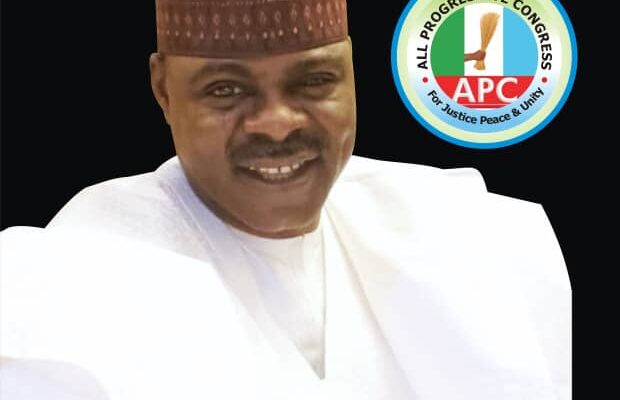 Women Groups and Youth in Kogi State have called the former Commissioner for Agriculture and Natural Resources and a stakeholder of All Progressive Congress (APC), Dr. Tim Nda Diche to contest for Gubernatorial position in the state come 2023.

Representing the women groups, mallama Hadiza Isa,, asked the Chairman, DichMark Group,Abuja, Dr. Tim. Nda Diche to vie for the Governorship seat in Kogi because he is more than qualified.

Hadiza explained that Diche is a trained economist who is also an Insurance broker, and an advocate for gender including men, youths and children.

She further explained that Kogi would be in good hands as the first person to come from minority part of the state, Bassa Local Government Area., due to the fact that the minority will not discriminate in discharging his duties.

The Representative of the women added that Diche would be able to give the needed direction with his experience, noting that he will make it eventually condusive for the people of the state to live peacefully.

“We, women in Kogi are calling on the APC and stakeholders to give an opportunity to Dr. Tims Nda Diche to clinch the ticket of the party because he is more than qualify.

“Diche is a trained economist. He will be able to stabilize the economic situation of the state and he also stands as an advocate for gender, men inclusion, youths and children.

“And as an economist, if he gets to be Governor, we know Kogi will be in good hands because we know he will not discriminate.

“With his wealth of experience, he would be able to give the needed direction.We believe with God and the people of Kogi state, he will make it.” She said.

” Diche’s efforts in struggling to clinch the ticket in the past especially in 2015 was an indication of good intention to come and put things right”. She noted further that this justifies commitment and readiness to overcome..

Hadiza therefore,call on Dr. Tims Diche to yield to the call by our women in Kogi state..But said we expressed no doubt that he would win if he eventually yield to their calls..

“ Diche’s commitment and loyalty to APC is an indication of serious minded person,which shown someone who is ready to overcome what is at stake, ” I believe with the tenacity of purpose, I believe he would make it,“I don’t have any doubt that if he yield to our call that he won’t win.” She said.

In a related development, APC Youth campaign For Good Governance. APC,YCGG, has also called Dr. Tims Nda Diche to contest for the next gubernatorial race in kogi state and urged him to accept its request.

The coordinator , Sunday Oloruntoba from Kogi Western Senatorial district,. said they would present letter of their request to Dr. Tims Nda Diche.

Speaking, Oloruntoba said their call was necessitated by what he referred to as the ” man who the cap fits ” his humility , simplicity and human kindness gave us the reason why he should be accepted as the next flag bear of APC in the next dispensation.

Describing their moves as ” love for kogi state”, Oloruntoba said his group wanted Kogi state to “have a geranally acceptable Candidate in 2024”, he stressed.

“ As youth leaders,we are determined to ensure Dr. Tims Nda Diche contest and win the governorship race,and to make sure that in 2024, we do not just have a young and vibrant governor but a very sound minded person”,

“It is on this note that the youths are calling on Dr. Tims Nda Diche to run for governor come 2024″,

“We would all matched to his office in Abuja to call him to contest
“We are assuring him of our maximum support throughout the electioneering campaigns, he said

Dr. Tim Nda Diche is the Maaji of Bassa-Nge Kingdom, hailed from Adum-Woiwo in Bassa LGA,Kogi East of Kogi State. Obtained Honors Degree in Economics and Masters Degree in four other Disciplines in Economics, International Law and Diplomacy, Public Administration and Bussiness Administration at various Universities in Nigeria and Obtained a PhD degree in Political Economy.

TAG2023: Women Youth Groups call on Dr. Tim Nda Diche to contest for Governorship in Kogi
Previous PostElection is not a war but a game of interest--Says SWS National President Next PostOnu Egume dies @78