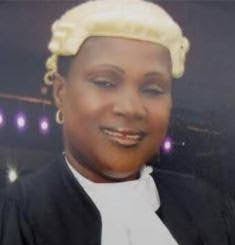 The National President, Standup for Women Society, (SWS,) Barrister Liberator Deborah Ijadele-Adetona has called on youths to shun violence during and after the campaign and elections 2023 in order to move the country forward.

The president, made this public through the association’s national public relations, Liberator Billie Nwogu.

Adetona said politics is a game of interest where the winner and loser must emerge.

She called on politicians to discourage campaigns of calumny saying what they preach is what their supporters will follow.

She also called on women across the nation to give maximum support to women candidates across the parties in the coming general elections, saying, if Nigeria needs to get better, women must be giving all support to also be elected into political offices across the all selected and elective positions in Nigeria.

She called on the big wings in society to carry women and youths along.

The SWS President appealed to politicians to avoid hate speeches and all actions capable of truncating the outcome of the forthcoming 2023 general elections.

She urged politicians not to interfere in the activities of the Independent National Electoral Commission (INEC).

“We,Nigerians must support and respect the fundamental human rights,and follow the electoral processes as stipulated by the INEC to fulfil its constitutional mandate.

Just as we called on INEC to display transparency and accuracy,we expect politicians and their supporters to allow INEC to operate freely without pressure from any power that be.

She added that politicians should make their campaigns issue-based and take a firm stance against violence and hate speeches.

TAGElection is not a war but a game of interest--Says SWS National President
Previous PostIllegal harassment of Kogi state officials, govt to sue EFCC for Contempt of Court Next Post2023: Women,Youth Groups call on Dr. Tim Nda Diche to contest for Governorship in Kogi