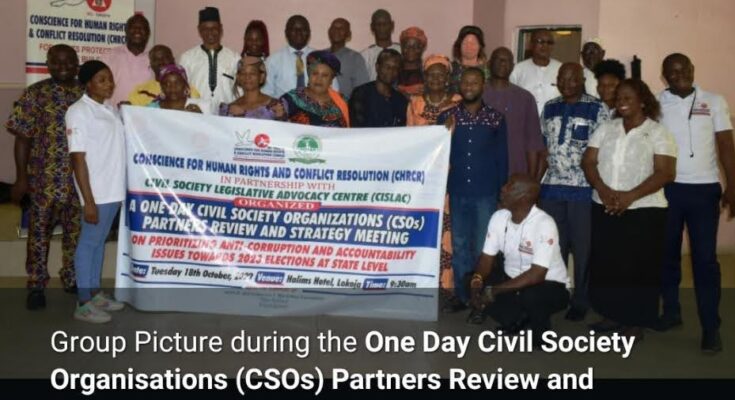 2023: NGO calls for issue base campaigns to avoid money politics

The Executive Director of
Concience for Human Rights and Conflict Resolution (CHRCR), Comrade Idris Miliki has said that there must be strategically designed, issue-based campaigns in elections to reduce the influence of money politics that lead to corruption.

This was contained in a communique issued at the 1-Day civil society organizations (CSOs) partners review and strategy meeting on prioritizing anti-corruption and accountability issues towards 2023 elections organized by conscience for Concience for Human Rights and Conflict Resolution (CHRCR) held in Lokoja on Tuesday.

He said the Independent National Electoral Commission (INEC) Kogi State has not shown commitment in mobilizing citizens and accessibility as all efforts to engage it by stakeholders has failed despite the crucial period of campaigns by political parties and Candidates towards for the 2023 general elections in Kogi State.

He disclosed that there are several reports of eligible persons who have wish to Register to Vote but can no longer do so due to the closure of the registration portal.

He noted that partnership and collaboration among Stakeholders implementing Anti-Corruption and Accountability activities will promote sustainability and ensure scale up and scope of success towards the 2023 Elections.

According to him, there is need to increase Voters Education targeting groups that traditionally are not targeted (e.g Hunters, Artisans, general persons at the grass root level who are voters like every other person) especially before elections to ensure adequate awareness creation on the electoral process.

“Concerted efforts must be made to incorporate and include Persons with Disabilities taking cognizance of their peculiarities during elections.

“INEC to improve on its enlightenment and stakeholders mobilization on its activities at State level to encourage citizens confidence and participation.

TAG2023: NGO calls for issue base campaigns to avoid money politics
Previous PostOne out of ten boys sexually abused in Kogi----NGO Next PostBUA not interested in Kogi land- Management.