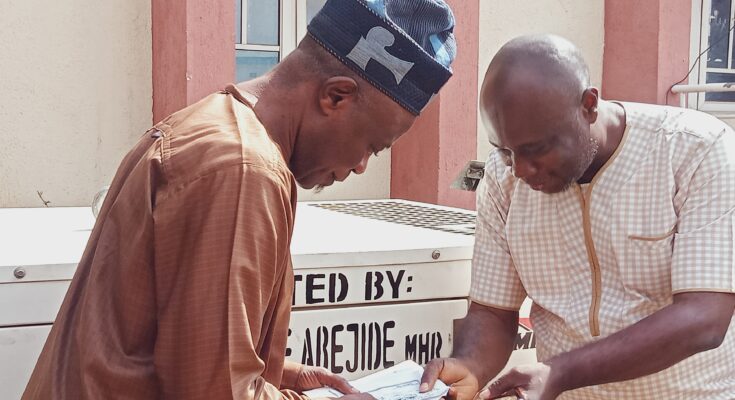 Honourable Abejide made the donation of Friday at the NUJ Secretariat in Lokoja.

Speaking at the occasion, Abejide said the donation was in fulfillment of his promise during a visit to the Council recently five months ago.

He described the journalism profession as key in promoting good governance, hence the donation, expressed delight at the contributions of the media to the growth of democracy, promised continued collaboration at all times.

Abejide assured that he would continue to ensure effective representation of the Constituency, thanked the leadership of NUJ in Kogi State for being responsible and responsive in there reportage

The Chairman, Kogi State Council of the Nigeria Union of Journalists, Comrade Adeiza Momohjimoh while receiving the Mikano on behalf of the union described Hon. Leke Abejide, Member Representing Yagba Federal Constituency as a promise keeper.

The Chairman described the Lawmaker as a exceptional politician who is touching lives beyond his constituency.

The Chairman NUJ said the gesture by Hon. Leke shows his love for the Union, expressed appreciation that without asking, the Lawmaker made the promise, without any reminder, he delivered his promise.

Comr. Adeiza described Hon. Leke Abejide as an exceptional lawmaker, using his representation to touch lives in positive ways within and outside Kogi State, urged others to emulate his good gestures, said Hon. Abejide has distinguished himself and should be prepared for greater tasked in the coming future.

The NUJ Chairman assured that the generator will be put to proper use and promised to sustain the partnership, noting that what the politician has done should be emulated by others who often promise and fail.

The NUJ Chairman expressed appreciation to Leke Abejide, urge the electorates to always identify politicians who have genuine interest of the development of their people and other strata of the society for election and reelection.

It would be recalled that in demonstration of good and responsive leadership as well as the quest to promote the activities of Nigeria Union of Journalists in Kogi State, the Member Representing Yagba Federal Constituency at the House of Representatives, Leke Abejide donated a Mikano generator to Kogi State Council of NUJ.

Also speaking, the ADC flagbearer for Yagba East, Chief Adesoji Odojin, drum support for Hon. Leke Abejide, assured that what was witnessed in the first term would be a child’s play when he is reelected.
E