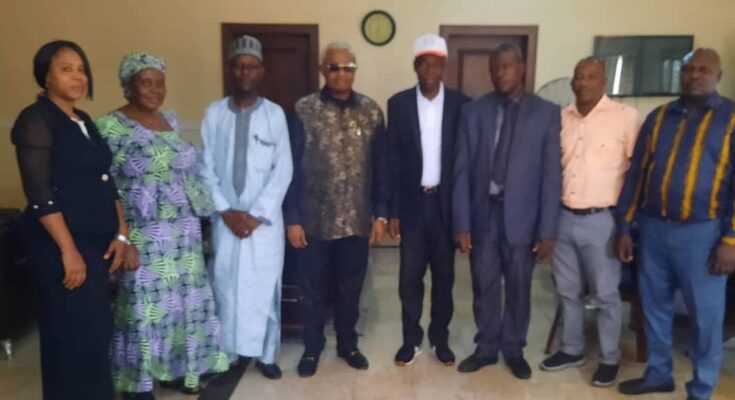 The Acting Chief Judge of Kogi State, Hon. Justice Josiah Joe Majebi, has pledged to implement the recommendations of the committee without delay.

Following the recommendations arising from discoveries by Kogi High Court’s Council of Judges’ subcommittee on Repositioning and Supervising the Directorate of Personnel Management of the Court.

The committee has recommended the termination of the employment of staff employed into the system through a process it described as an “abnormality”.

The Acting Chief Judge, while receiving members of the committee in his office at the High Court of Justice headquarters in Lokoja stated in their report that names of persons on the pay roll of the High Court were not found on the court’s nominal roll (register) of staff employed within the period January 2021 to June 2022, which falls within the period of its terms of reference.

“After a careful check of the names of newly employed staff from January 2021 to June 2022, the staff disposition list and payroll, it was discovered that some of the names on the payroll could not be found on the staff disposition list of the courts and other departments. Therefore, it is an indication that though their names are on the pay roll but they do not have duty stations and do not work anywhere in the Inspectorate offices” stated the committee in its interim report.

Thus, the committee, which has Hon. Justice Muhammed Etsu Umar as its Chairman, while submitting its report recommended that immediate and urgent action be taken to correct the anomaly of having some staff in the pay roll without duty stations.

“It is our recommendation that it is an abnormality for a staff to be on pay roll without duty station. Such situation should be immediately corrected by termination of employment of such persons affected.”

It also went further to recommend that certain names of some persons who were found in the pay roll of the court but not in her nominal roll should be removed from the pay roll just as it also advised that “henceforth, employment (by the institution) should be highly regulated to the needs of the judiciary establishment and based on budgetary provisions and availability of vacancies.”

Commending the state’s Judges in their new supervisory roles over Directorates of the High Court, the CJ noted that the High Court of Justice of Kogi State was defined in the past by the quality of her Judges who are blessed with wisdom, knowledge, competence, calmness and discipline.

He said he had realized long before becoming the Chief Judge that given the opportunity, wonderful results would be achieved from them and therefore added that decisions being reached by supervisory committees headed by Judges were collective decisions in the best interest of the institution.

“I appointed Hon. Justice M. E. Umar to head this committee and my lord Hon. Justice A. O. Salihu as member knowing fully well that honesty, commitment, decency and diligence will be involved.

“So the decisions being implemented are in the best interest of the institution as I am being guided by the three principles of showing love and being concerned with the problems and happiness of the people I lead; recognizing that other persons in the organization are relevant and significant and as well ensuring that they are secured under our leadership.

“I used these three elements as a foundation for my administration so that when we started we had already known that the welfare of the staff of the judiciary and the good name of Kogi State Judiciary is paramount to us. So we all decided that we will come together for the benefit and the interest of the system so that the system can be placed properly.

“And when I assumed office I said the prevailing order cannot achieve what I want to achieve so I had to joggle with the order. So I changed the DPM and have always invited the JUSUN Chairman because staff welfare and the interest of the system should always be our purpose individually and collectively. We cannot afford to allow the system to collapse.

“So my lords I really want to use this opportunity to appreciate your work and your sacrifices. I know how long you want the system to work right. I will go through the report very well and we will act on it immediately. There will be implementation because it is looking at the integrity of the system that matters” he concluded.

The 4-man committee which also comprised a Deputy Director in the Directorate, Mr. Paul B. Egwu, as member also has the Acting DPM/DCR of the High Court, Ezema A. Beatrice Esq., as its Secretary.

According to the Chairman of the committee, Hon. Justice Umar, who had earlier appreciated the Chief Judge for deploying his experience in carving out a vision that will strengthen and restore the integrity of the judiciary, he said as supervisors of the Directorate of Personnel Management, the committee ensured that they aligned with the CJ’s vision and in doing that a lot of things were unraveled.

He said since their focus was from January 2021 to June 2022, they relied upon the report of the Committee on Staff Verification of the High Court of Justice submitted in December, 2020 to appraise the entire workforce of the High Court shortly after the unfortunate demise of the late Chief Judge, Hon. Justice Nasiru Ajanah, which “changed everything in the system”.

He said subsequent administrations, not minding the finances of the judiciary, threw the organization into what led to agitations for implementation of promotions and minimum wage by judiciary workers.

He said the committee realized that the agitations were not unconnected with the “astronomical rise” in the High Court workforce within this period and decided to be rightly guided since his lordship’s focus was to set standard.

“If doing the right thing has any negative effect on some individuals such action cannot be faulted so long as the decision and action is beneficial to the system and it is sustainable for both the staff of the organization and the overall administration of justice itself” he stated.

He disclosed that they looked at the objectives of the committee which was “to meet and achieve a better standard for all employee’s services under the High Court of Justice; to determine the number of newly employed staff from January 2021 to June 2022” and to examine “the list of staff from January 2021 to June 2022 on the staff disposition list of the nine (9) Inspectorate Zones of Kogi State vis-à-vis those on the pay roll”

he added: “We discovered that we have about 40% increase of seven hundred and six (706) staff within the period under review. With the discovery of this astronomical rise in our number of staff within this period, we decided to examine the rise by juxtaposing it with the finances and infrastructure of the judiciary with a view to its sustainability and there were names found on the pay roll but not found in the staff register. This contains thirteen names which added to the 255 gives us 268 none existing staff on the pay roll but are not traceable to any duty station” said the committee Chairman.

TAGKogi Ag. CJ to implement committee’s recommendation to terminate improperly employed staff of the high court
Previous PostHow Islamic Cleric Was Killed In Yobe Next PostWhy I Am After Dogara's Life, Suspect Confesses