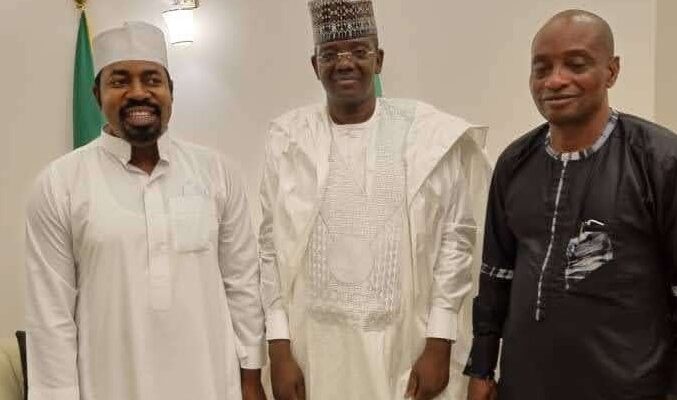 He pointed out that there is no iota of truth in the allegation made by Alhaji Taufiq Isa, Council Chairman of Ijumu LGA that he is not qualified to be voted for.

Mohammed made the disclosure while reacting to allegations made by the Ijumu LGA Council Chairman that he is not fit to hold a councillorship position because of his qualifications, described the allegations by Hon. Taufiq as very unfortunate, particularly that he had helped him to gain relevance in the National politics of ALGON.

Mohammed explained that he is presently enjoying an overwhelming support of the people of Kogi West Senatorial District having found him eminently qualified, with capacity to represent them, described the allegations as unfounded by a man who thinks everyone is ignorant.

While pointing out that his disagreement with Alhaji Taufiq followed the discovery that Hon. Alabi Kolade David, the present National President of ALGON was an impostor, stressing that the present President shouldn’t have been elected as ALGON National President, having discovered that he was not an elected Chairman, but an Administrator of Bariga LCDA.

In his words, ” My sin stems from the fact that it was discovered that Hon. Alabi Kolade David was not elected. With the discovery, I said how can a man who is not a member of the 774 elected Council Chairman superintend over ALGON as head. I called other elected Chairmen to intimate them of the abnormalities.

” Without mincing words, I was instrumental to making Hon. Alabi to serve as ALGON Boss based on the information he made available to us at that time that he was elected.

” But as soon as we got a petition from the Chairman of Somolu Bariga that Bariga was an LCDA with an appointed Administrator as such he could not be subordinate to someone under him, we decided to call for the dissolution of the Executives and to set up an Interim Management Committee because at that time I was in charge in the affairs at ALGON headquarters.

” There is no doubt that i was in the forefront pushing for Alh. Taufiq for the Chairman of ALGON National and in the process I took him round some State Governors, including Gov. Yahaya Bello soliciting for there support.

” Unfortunately, the same persons I took Alh. Taufiq to introduce to, were the same people he gathered and invited to Lokoja under a phantom National Conference. For a man I brought to the limelight of National ALGON and to be given the National Legal Adviser at first instance, to now turn around and twart the IMC arrangements with an Impostor, with people who are not elected Council Chairmen to converge on Lokoja and to disorganize plans to elect and swear in a constitutionally recognised Council Chairmen, is most unfortunate.

” It is important to place on record that the same Alhaji Taufiq is in court with the same Hon. Alabi over diversion of over N5billion. Let him tell the public why he dragged him to court and they are still in court.

” I single handedly brought Hon. Alabi to be ALGON National Chairman and also brought in Alhaji Taufiq at that time. I’m most disappointed that the man I brought to the limelight of ALGON politics would now turn around to bite the fingers that fed him and to negotiate out the IMC.

” Let me place it on record that I also raised the alarm that funds belonging to the Council were on the verge of being diverted through the Paris fund refunds, the funds that Alhaji Taufiq thinks he can share from which was the reason he has become a betrayal to now join an impostor.

Mohammed maintained that there is no iota of truth in the allegations of his academic qualifications , pointing out that his credentials are there for anyone to see, having been submitted to his party, the INEC, verified by the DSS without any misgivings.
He wondered how a layman like Alhaji Taufiq who probably thinks everyone is like him would be alleging, insisted that he has passed through all the institutions that should preside over a candidate contesting an election with all his submissions without blemish.

Mohammed further disclosed that he has worked closely with all former leaderships of ALGON at the National level without rancour, said he will continue to agitate for the right thing to be done and not close his eyes to abnormalities and diversion of funds by a few.

He assured that he will win overwhelmingly in the forthcoming election pointing out that his credentials, capacity and ability to speak for the people of Kogi West Senatorial District are reasons why he is enjoying the tremendous support of the people.