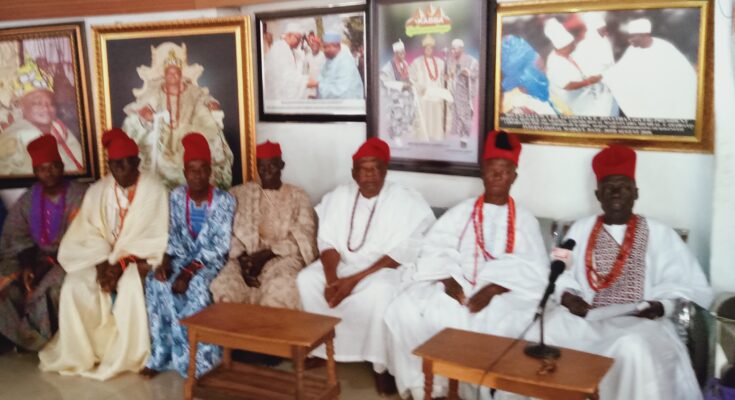 The Ilajo Royal family of Kabba, headquarters of Kogi West Senator district made the appeal on Tuesday while addressing newsmen on the state government intension to build centralised new Palace for Obaro of Kabba.

According to the royal family, the insinuation that the ancient town as now palace is untrue, and such the call for the building of a new palace should not be entertained by the state government.

The plea was made known on Tuesday when members of the clan spoke with newsmen in Kabba and as well, walked newsmen round the point where past Obaros were buried inside the palace, including the late Obaro of Kabba, Micheal Olobayo who was buried in 2016.

Chief Peter Oloba, the Obasaiyepe of Oweland who spoke on behalf of the ruling house said it is untrue that an ancient town like Kabba which is more than 200 years of existence will not have a centralized palace.

He therefore urged the state government to wait till the determination of the suit initiated by the Ilajo family against the present Obaro of Kabba, before any decision on construction of a palace should be considered.

“We have called this press conference to debunk the deliberate act of gross misinformation and mischief unleashed by Chief Solomon Owoniyi on the occasion of the year 2022 Kabba Day, which took place on Saturday November 6, 2022 at the Kabba Township stadium asking for the construction of a new palace in Kabba.

“We see this as a deliberate act of causing confusion and as usual, a way of distorting the historical facts and age long tradition and culture of Oweland, by insinuating that there is no palace in Kabba.

“We hereby set the records straight and wish to state categorically without equivocation, that Kabba Town has always had a palace, a significant paraphernalia of royalty and the center point of Owe culture and tradition.

“Our palace, the Obaro Palace is well over 200 years old. Our palace is called Aoffin (the Owe dialect for the Yoruba world Affi, which means palace).”

Citing many of the late monarch and the year they were buried at the palace, “Several Obaros have occupied this palace for centuries and their earthly remains are interred in and around this palace. Amongst are “Obaro Baba Mokelu (1870), Obaro Baba Ajinuhi (1870), Obaro Baba Gbayero aajibohokun (a1922) ….Obaro Micheal Olobayo (2016).

“We therefore believe that the Kogi State Government should not get involved in an issue that is not unconnected with the matters in court of the land and as such stay action on anything that concerns this sensitive matter.

“We of Ilajo the Royal Family of Kabba, Oweland, are praying the Kogi State government to allow for the full determination of the subsisting court case before decision of regarding palace is made.”

They however eulogised the state government for the reconstruction of some major projects in the community.

TAGIlajo Royal House kick against new centralised Obaro Palace urge Kogi govt to wait for court ruling.
Previous PostDangote-led Flood Committee commences Distribution of N1.5bn relief items to victims nationwide Next PostTINUBU, THE SEAT OF THE PRESIDENT IS A CHAIR AND NOT A BENCH.