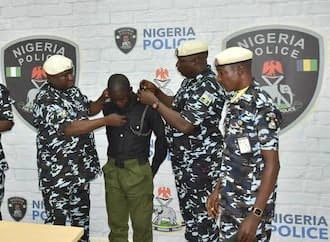 The Authority of the Nigerian Police Force has dismissed Richard Gele, the officer who was seen in a video clip justifying extortion, the video had gone viral on social media.

The spokesperson of the force, Muyiwa Adejobi, revealed the dismissal in a statement on Friday, July 29, Premium Times reported.

Why police dismissed officer, found glorifying extortion in viral video
He was dismissed after a public outcry against police harassment and extortion, especially from youths.

According to Adejobi, Gele was an inspector with a service number AP/No. 188547. He was attached to the police mobile force 77 squadrons, Okene, Kogi state. He was deployed to the Itobe-Anyigba Road for the safety of road users and commuters, which was the incident’s route.

The statement added that the dismissed officer was de-kitted after passing through a disciplinary committee within the force.

He is a Benue state indigene who joined the police force in 2000.