Home Interview If in little thing, you cannot excel, how do you excel in great things?—Achuba mocks Bello
Interview 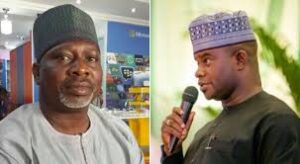 Well, during politics, the return on investment is very little. All the things I have, I had them out of politics, but during politics, one is never at rest and whatever comes is going out, including whatever you are getting from your business. But some people come into office as thieves; they come to steal state funds without fear of God.
They, that is in Kogi State, do it to the extent that they boast that they are working with EFCC and the commission can’t do anything to them because they are the ones teaching them how to get their figures right.
So, to Nigerians in the face of the violence in the land, I urge them to look unto God and continue to pray for His intervention. Let us pray so that He provides us with leaders who have the right solutions. We want Him to open the eyes of our current leaders to know what to do because if we have the army, the air force but these bad elements who do not have the air force, are still harassing us, then something is wrong. Why has this fight taken this long?
Why would a nation allow its borders to be so free that foreigners would become our own problem? We say they are foreigners, they are not indigenous Fulani, who brought them in?
It has to do with the immunity that allows a governor to do and undo. These elements were brought in by some governors for the purposes of elections and after the elections the people were not settled. They tried kidnapping and they got too much money, so it became a trade. They had to beef up, buy more guns and continue with it because bandits, armed herdsmen, Boko Haram have become big business.

TAGhow do you excel in great things?---Achuba mocks Bello If in little thing you cannot excel
Previous PostARMTI trains 50 agric produce exporters on better practices in Kwara Next PostDangote to Re-construct 4 Federal roads, 2 in South-East