The Confluence University of Science and Technology (CUSTECH), Osara received in audience on Monday 21st November, 2022 the delegation of Hydroelectric Power Producing Areas Development Commission (HYPPADEC) for the commissioning of a newly built four thousand (4000) litres of solar powered water tank borehole dug within the campus of CUSTECH, Osara.

The Vice Chancellor of CUSTECH, Osara Engr. Prof. Salawu Sadiku was on ground alongside the Management Staff and staff members to receive the HYPPADEC delegation which included a Council Member representing Kogi State at HYPPADEC, Alh. Isah Ozi Salami and the Kogi State Coordinator of HYPPADEC, Mrs. Joan Oguche and other team members.

According to Balogun Omeiza David Head, Public Relations Unit, CUSTECH, Osara, said before the commissioning of the water project, Engr. Prof. Salawu Sadiku took the HYPPADEC delegation to the site were ongoing construction of buildings within CUSTECH is ongoing.

“He showed them the structures embarked upon by the Kogi State Government ranging from the Senate Building, University Library, Faculty of Engineering, Faculty of Computing and Informatics and Faculty of Basic Medical Science and Health Sciences.

Other ongoing projects are the ones being funded by the Tertiary Education Trust Fund (TETFUND) and they are: Faculty of Environment Design, Faculty of Management Science and Social Sciences, Faculty of Science and the 500 Capacity Lecture Theatre.

Engr. Prof. Salawu Sadiku poured encomiums on Alh. Isah Ozi Salami, the Kogi State Council Member at HYPPADEC as one of those he looked up to as a role model at a time he was gradually climbing the rungs on the ladder of his academic pursuit.

He described him as a man that has always been interested in the progress of Ebiraland and even the nation at large.

Responding to the Vice Chancellor, Alh. Isah Ozi Salami gave thanks to God Almighty for sparing his life to be part of the living witnessing the start of the Confluence University of Science and Technology (CUSTECH), Osara.

He also commended the Vice Chancellor, Engr. Prof. Salawu Sadiku for living up to expectation right from the time he has known him.

He equally mentioned the positive contributions of the VC to the Ajaokuta Steel Company and also the indelible academic impact he left behind at the Federal University of Technology (FUTH), Minna before picking up the hallowed job of the Vice Chancellor of CUSTECH.

Moving forward, Alh. Isah Ozi Salami said, “One of the reasons I have a soft spot for His Excellency, Alh. Yahaya Bello the Governor of Kogi State is that he is a politician that makes promises and goes on to fulfill them.”

He added that, “Without this ivory tower, the positive activities of HYPPADEC that is enjoyed by the states linked to the commission would not have taken place here in Osara.”

He prayed that God Almighty will speed up the development of CUSTECH, Osara so that it will be ranked as one of the best universities in the world.

Before cutting the tape for the commissioning of the Solar Powered Borehole, Alh. Isah Ozi Salami said, “This borehole is sited here for the benefit of the university community. We all know that water is life. The availability of good and clean water will stop sicknesses like typhoid and malaria. I strongly believe that proper care will be put up to look after this facility so that it will go along way to serve the CUSTECH, Osara community.”

After the commissioning, the 4000 Litres Solar Powered Borehole keys were handed over to the Director, Works and Physical Planning of CUSTECH, Osara Arch. Muhammed Usman. 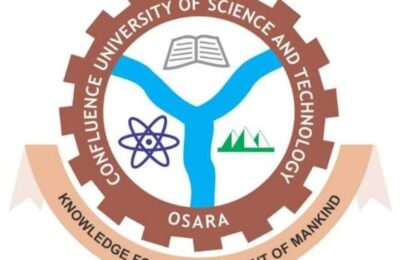