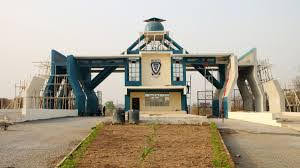 The Management of Federal University Lokoja, has issued a stern warning to those encroaching into the land of the institution at the Permanent Site, Felele, warning them to desist forthwith or be made to face the consequences of their ignoble actions.

The warning followed an on-the-spot assessment of the Institution’s Permanent Site land at Felele where the Management and security agents discovered various unwholesome activities of land grabbers in the area.

Reacting during the inspection visit, the Vice-Chancellor of the University, Professor Olayemi Akinwumi decried the level at which some unpatriotic citizens have devalued education by attempting to sell portions of land meant for the Institution to individuals, stressing that the University would no longer fold its hands and watch them succeed in their nefarious ventures with reckless abandon.

Speaking further, the Vice-Chancellor pointed out that the team, during the tour, discovered that some new buildings were already at different levels of completion while other parcels of land were allocated to unidentified individuals who are yet to commence work.

The VC, therefore, warned “owners” of such projects not to make any further efforts at completing them, saying all legal actions would be enforced to reclaim the landed property belonging to the Institution.

In a statement released on Thursday and signed by Daniel Nwakwo, Public Relations Officer, the University Management stated:

“It has come to the notice of the Management of the Federal University Lokoja that some unscrupulous elements were making merchandise of the University’s landed property at the Felele Campus.

“The University Management and some security agencies were conducting an oversight function around the University landed property at the Permanent Site in Felele and came to a shocking discovery that some individuals have been selling off portions of the land to their cronies. During the inspection, we saw beacons with names and phone numbers, some roofed uncompleted buildings and new structures springing up rapidly everywhere in the University land to our utmost surprise.

“The University Management was appalled by the level of unpatriotic activities of people who should be partners-in-progress with the Institution, and therefore has instituted concrete moves immediately to inform all relevant stakeholders, while security agents have been stationed to arrest and prosecute any trespassers.

“We want to sound this note of warning to discourage anyone wishing to further get involved in this criminal activity to as a matter of urgency desist from it, while those who have made payments in acquiring the land are advised to request for a refund of their money.

“It should be noted that encroaching into the landed property of the Federal University Lokoja and selling any portion of it to the highest bidders is tantamount to stealing and an outright confrontation on the University which will no longer be tolerated. Any further attempt on this will be met with severe penalties by relevant authorities of the government. To be forewarned is to be forearmed!

“Again, we still want to appeal to traditional rulers in the host communities to speak to their subjects who are involved and notorious in such illegal and criminal activities to discontinue forthwith. However, we want to commend and appreciate some of the communities that have refused to join the bandwagon and distanced themselves from this evil act.

“Lastly, farmers are equally warned to stop unauthorized activities on the University land with immediate effect, but those who already have their crops on the land are given ample time to harvest their farm produce during the next harvest season.”