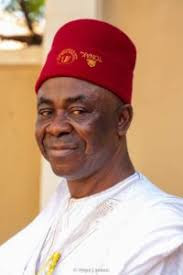 The immediate past Minister For Labour and Employment, Prof. Stephen Ikani Ocheni, has been called upon to contest the forthcoming Kogi state governorship election.

The call was made on Wednesday by members of Bliss Foundation at a press conference held at the NUJ Press Centre Lokoja calling on Prof. Stephen Ikani Ocheni to contest the 2023 Kogi State Governorship election.

Mr. Enejo Kennie Enejo who addressed the press conference described the former Minister as having all it takes to take the State to the desired levels of development, pointing out that his antecedents in public service has shown that he has the capacity to govern the State.

The group described Prof. Ocheni as one with impeccable records, the requesite experience and knowledge, robust public service records as well as all it takes to drive home the desired strategies for the development of the State from 2023.

The group says the appeal for Prof. Ocheni to join the race for Kogi Governorship is because of his enormous extra ordinary intellectual leadership qualities and capacity of Prof. Ocheni over the years.

While pointing out that the challenge which propels the call for Prof Ocheni to join the Governorship Race, is because political leadership globally is no longer an all comers game, but an intellectual enterprise, for people who are innovative and with creative ideas, urged the former Minister to harken to the voice of the people at the Grassroots to heed the clarion call.

While pointing out that Prof. Ocheni symbolizes all the intellectual qualities and capacity for who should be the next governor in the state should, said he has all it takes for the State to fulfill her destiny, dreams and aspirations.

He hails from a village called Uwowo in Igalamela/Odolu Local Government Area of Kogi State.

He obtained his West African School Certificate from Idah Secondary Commercial College, Idah, in 1979 and bagged a Higher National Diploma from the Federal Polytechnic, Idah, in 1983.

The former Minister obtained an MBA (Finance) from Enugu State University of Science and Technology in 1990 and bagged a PhD in Financial Management from the prestigious University of Nigeria, Nsukka in 2004 after successfully undergoing a rigorous M.Sc/PhD programme.

Being a man with a voracious appetite for knowledge, thoroughness and professionalism, Mr. Ocheni took his quest beyond the shores of Nigeria as he embarked on series of professional training in the United States and the United Kingdom.

These endeavours fetched him a Certificate in “Strategies for Home ownership”, from Howard University Washington DC, USA, Certificate in Internal Auditing with Computer Application from Worthing, West Sussex U.K, and Certificate in Project Financing and Sustainability, USA.

He is a thorough professional and technocrat with unblemished records. In this regard, he has at various times served as Financial Controller, World Bank Assisted Kogi State Essential Drugs Programme; Director (Office of the Accountant General, Kogi State/ State Programme Accountant, UNDP) and Permanent Secretary in Kogi State, all between 1992 and 2003. At the federal level, he was Deputy Director, Ministry of Housing and Urban Development; Director, Office of the Accountant General of the Federation; and Director, Finance and Accounts, Ministry of foreign Affairs all between 2003 and 2013.

Mr. Ocheni is a teacher and researcher of no mean repute. He was a lecturer in Accounting, Taxation, Cost Accounting and Management Accounting at the Federal Polytechnic, Idah, Kogi State, between 1985 and 1993. His zeal for and commitment to research is demonstrated in the number of books written and scholarly articles published in reputable journals.

These include six books in Accounting, Finance and Management issues published by the Spectrum Books Limited, Ibadan, 42 articles published in reputable international journals with many of them available online and six others published in local journals.

The research and academic prowess of the former minister captured the attention of the National Universities Commission, NUC, which engaged him as member of undergraduate and postgraduate accreditation panels to universities across the country.

The former minister was appointed Professor of Public Sector Accounting by the Governing Council of Kogi State University in October 2013 has been fully involved in administration, teaching, research and supervision of students at the undergraduate, masters and PhD levels since then.

He has successfully supervised numerous postgraduate students (M. Sc and PGD) in Accounting and Taxation and is currently involved in the supervision of PhD students.

It was to the credit of Professor Ocheni as the Dean, Faculty of Management Sciences that Kogi State University recorded huge success in the first ever postgraduate accreditation of programmes in the faculty by the National Universities Commission (NUC).

In terms of national and community services, the Ministerial nominee has served as chairman/president and member of boards, committees, council and associations at both the local government, state and federal levels. The most recent of such assignment was his chairmanship of Kogi State ADHOC Committee on Fiscal Responsibility saddled with the responsibility of working out the strategies for the implementation of Treasury Single Account (TSA) in the State, adoption and implementation of the Contributory Pension Scheme and post autonomy strategies for enhanced revenue collection by Kogi State Internal Revenue Service (KGSIRS).

Professor Ocheni has attended numerous conferences, workshop and seminars at the national and international levels and presented thought provoking papers at such occasions. Among them are “Project Financing and Sustainability, Management Sciences for Health” (Boston, USA, 1994); “Strategies for Home Ownership Howard University” (Washington DC, USA, 2006); “Enhancing Policy Consistency in Governance: Pathway to Sustainable Growth and Development in Africa” (University Auditorium, University of Lome, Togo (2011); and “Impact Assessment of Internal Audit on the Performance of Public Sector Management in Nigeria: A study of selected States in Nigeria”. Annual Joint Conference of the International Academy of Business and International Educators Group (Washington DC, USA, 2014).  He has also been involved in numerous diplomatic engagements in and outside the country.

Mr. Ocheni’s commitment to professionalism and service of humanity has earned him several awards from reputable bodies and organisations over the years. These include Kogi State Merit Award as The Best Permanent Secretary in Kogi State; Distinguished Honours Awards by the Nigerian Labour Congress (NLC) FCT Council; Award for hard work and Financial Prudence by the Nigerian Union of Journalists (October 2010); Merit Award by the Rotary Club International; Award for Academic Excellence and Hard-work by Igalamela Community Development Association, Abuja Chapter; Distinguished Service Award by the Institute of Independent Marketing Management of Nigeria; Distinguished Leadership Award by Igalamela Solidarity Forum; Merit Award for distinguished Humanitarian Services by the Old Students Association of Idah Secondary Commercial College (2010); Award of Excellence by the Directorate of Technical Cooperation in Africa in recognition of technical support to the Directorate, among others. The University don holds the title, “Omachi Atta Igala” conferred on him by the late Atta Igala, His Royal Majesty, Aliyu Obaje.

The former Minister is happily married with children.