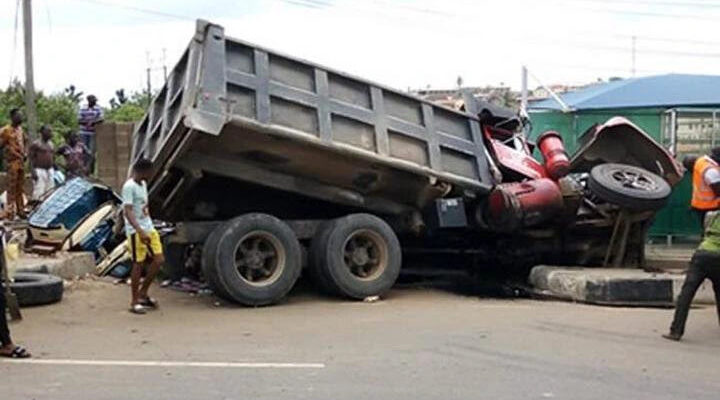 Five persons have been killed while four others sustained serious injury when an articulated vehicles at about 7.30 pm on Sunday night crushed vehicle in Okene town of Kogi State.

The accident was confirmed by the Kogi State Command of the Federal Road Safety Corps (FRSC), Sector Commander Steve Dawulong.

According to him, an articulated truck rammed into a cab at Oro junction, Okene in Okene LGA of the state.

Eyewitness accounts said more people would have been killed or suffered severe injuries but for the car which served as a wedge that prevented it from getting to the people sitting down at the other road leading to Ageva.

The Sector Commander, Steve Dawulong said the crash actually occurred at about 7: 30 pm at Oro junction, Okene where a truck brake failed and rammed into a passenger car from the rear resulting in the death of four persons (3males and 1female) with four others injured”.

According to him, “The corpses were taken to Okengwe General Hospital Mortuary while the injured were taken by their respective families” he said in response to an inquiry about the accident.

While sympathising with victims and their families, Dawulong advised fleet operators to have viable maintenance policies which should be adhered to strictly as means of ensuring routine maintenance and Vehicle roadworthiness before putting such vehicles on the road.