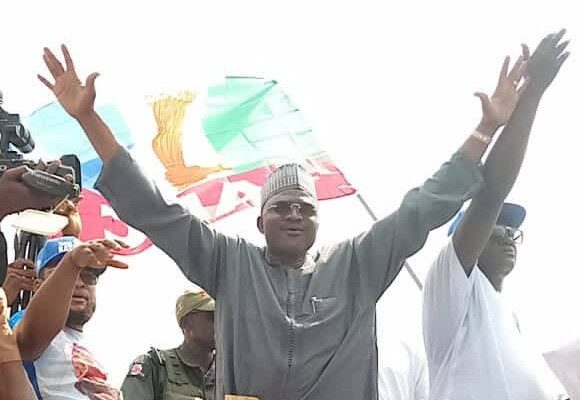 A political group, Team Gamji has staged a one million man walk in kogi state, to drum support for the presidential candidate of the All Progressives Congress. (APC), Senator Ahmed Bola Tinubu and his running mate, Kashim Shettima.

The solidarity work which kicked off at the Inike Field in Okene Local Government Area of Kogi Central Senatorial district on Saturday attracted thousands of supporters from the five councils of the district.

Speaking during the walk, at Ebira day ground, Alhaji Muhammed Sule (Sunday SEA), who is the chairman of the Gamji Coalition for Asiwaju, noted that this is a demonstration of their unalloyed support for the Asiwaju presidency come 2023.

“What we are doing today is on behalf of our patron and leader Alhaji Sanusi Abubakar, who ensured the success of this gathering today.

” we are going to work for the success of Asiwaju/Shettima. This is our project, they are saleable candidates. They are already President and Vice President in waiting.

He assured that the group has set up structures in all the wards in the district to deliver an overwhelming votes for the APC presidential candidate in the February, 2023 presidential election.

He called on all the people of the central senatorial district to key into the project, so that the area will benefit maximally from the Asiwaju presidency, assuring that Senator Ahmed Bola Tinubu is already a president in wait.

He stressed that Tinubu has done credibly well in terms of policy implementation and that his ability to build character and individuals cannot be overemphasized.

He said: “As a support group, our aim is to promote the candidacy of Asiwaju Bola Ahmed Tinubu to emerge the next democratically elected President of the Federal Republic of Nigeria on the platform of the All Progressives Congress (APC).”

“He is a team player, he ad president, can fully deploy the human and material resources of the country towards its development. He has done it before and he will replicate it again for the good of out nation.

He expressed optimism that with his track record, Tinubu will emerge victorious in the general elections.

Speaking also, the deputy chairperson of the group, Hajia Zainab Atimah described the large turn out if women as a sign of their love for Asiwaju and Shettima.

She called on the people to shun any sentiment and give their maximum support to this winning team, saying that with their enviable track records when they held sway as governors of their various state, Nigeria will be safer with them.

Speaking also Alhaji Ogunye commended the team for their hard work , saying Sanusi Abubakar has been tested in the past adding that he is someone that can be trusted.

He assured them that their efforts to make Asiwaju/Shettima presidency a success will not be in vein, stressing that the era of ‘monkey working and baboon enjoying is over.

Also speaking Alhaji Kent Abubakar the Chairman of Team Gamji thanked everyone that trooped out for the walk, saying that politics is local hence the mobilization and sensitization from the grassroot.

TAG2023; Group stage solidarity work for Asiwaju/Shettima in Kogi.
Previous PostAppointing professors into positions should be base on presentation of inaugural lecture-- Professor Akinwumi. Next PostHAMPTON COURTS, A Fine Attraction For The Smart Investor