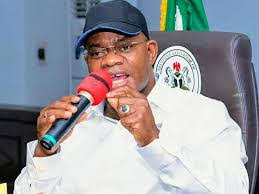 The Governor of Kogi State, Alhaji Yahaya Bello has warned detractors and perceived enemies in the state to steer clear ahead of 2023 general elections.

Governor Bello made this known when he made a public presentation of the candidates of the All Progressives Congress, APC in the Adavi/Okehi Federal Constituency and the central senatorial district of the state.

Governor Yahaya Bello gave the warning while in the local government to inspect the Government Technical College Oboroke billed for reconstruction, as well as other ongoing infrastructural projects.

Bello who addressed the people in Ebira Language, said his administration while trying to bring about infrastructural developments to the state, ensured an end to clannish acrimony which had ravaged Ebira Land in time past.

Part of the statement translated by our correspondent read;

“God gave us power to develop the land, and we have been avoiding problems. Sometimes, they put hand into our mouth, and I told my people to ignore. Those times, we ignored because we thought the actions were out of ignorance.

“For the time ahead of us now, my people, we will not wait for anyone to put hand into our mouths. Once you stretch the hand, we will cut it. With our back on God, feet on the ground, and mouth to the gods, we will cut those fingers.

In his words, the Governor said the politics ahead will be hot, and he will lead the fight.

“To be forewarned is to be forearmed,” he said, adding that he has changed from pleading the people to warning them.

“If you’re a man or woman, Ebira indigene or not, and you want us to fight, I am ready,” he said.

Governor Bello further urged the traditional rulers and parents to caution their children.

Speaking earlier on his plans for the college, Bello said he picked interest in development after he came across pictures of the dilapidated state of the school.

He revealed that he had also discussed the project with the Okehi Local Government Chairman, Abdulraheem Ohiare, and the State Commissioner for Local Government and Chieftaincy Affairs, Abdulsalam Deedat; and promised them his intervention.

While congratulating the principal of the college, Bello assured that reconstruction work would begin as soon as possible.