Home Sport Messi: There’s no excuse… the squad is dead because it’s a big setback 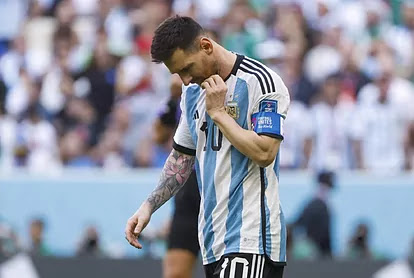 Messi: There’s no excuse… the squad is dead because it’s a big setback

Lionel Messi has spoken in the wake of Argentina’s shock loss to Saudi Arabia in their World Cup opener and he offered no excuses for his team’s disappointing showing.

The first half was marked by a series of Argentina goals ruled out for offside. The calls were the correct ones by the refereeing and VAR teams, but they appeared to affect Argentina nonetheless.

“We had those disallowed goals, at that time we thought we would have a lot of chances and we made the mistake of speeding up and going route one, instead of moving the ball from side to side,” said Messi.

“We knew that they would play a high line and we got caught up in that a bit.

“Then we went 2-1 down and we became disorganised, playing desperately.”

An honest assessment, but one that should be worrying for Argentina and showed their inability to navigate difficult situations in what should have been, overall, a relatively simple game for them. There will be bigger tests to come and they will have to improve quickly if they are to live up to their tag as contenders.

Tough blow to take
Messi also conceded that scoring so early may have not been the best thing for them. He also confessed that the squad took the result hard, but insists they remain united and ready to bounce back.

“The goal so early wasn’t good for us, it confused us. We knew that in the first game it could happen that we didn’t play as well as we can and we have been,” commented Messi.

“When the scoreline goes against you, it becomes even more difficult. The group is dead right now, because it’s a tough blow to take, because we were confident of getting off to a good start, of winning, and that calms you.

“But this group stands out for its unity, its strength and now is the time to be more united than ever and know we can go back to the start, to our way of playing to try to win.”

Optimism
Despite the setback, Messi wanted to end on a positive, looking ahead to the coming games. Next up for the Albiceleste is Mexico on Saturday.

“Calmness [is my message for the fans]. We know it’s a tough blow, one that hurts,” said Messi.

“We’re going to go and try to win against Mexico.”

Disallowed goals
The disallowed goals undoubtedly affected Argentina, but Messi doesn’t want to make excuses. VAR got the calls right, even though many pointed to how tight they were.

“I saw some photos, they were very tight,” said Messi.

“I couldn’t tell from the images, but if they ruled them out then it’s because they were no doubt offside.
Opera

TAGMessi: There's no excuse... the squad is dead because it's a big setback
Previous PostCourt reserves Dec 15 for ruling on chieftaincy tussle in Kogi Next PostSaudi Arabia manager Herve Renard insists he didn’t take the national team role for the money even though the money is "very good"