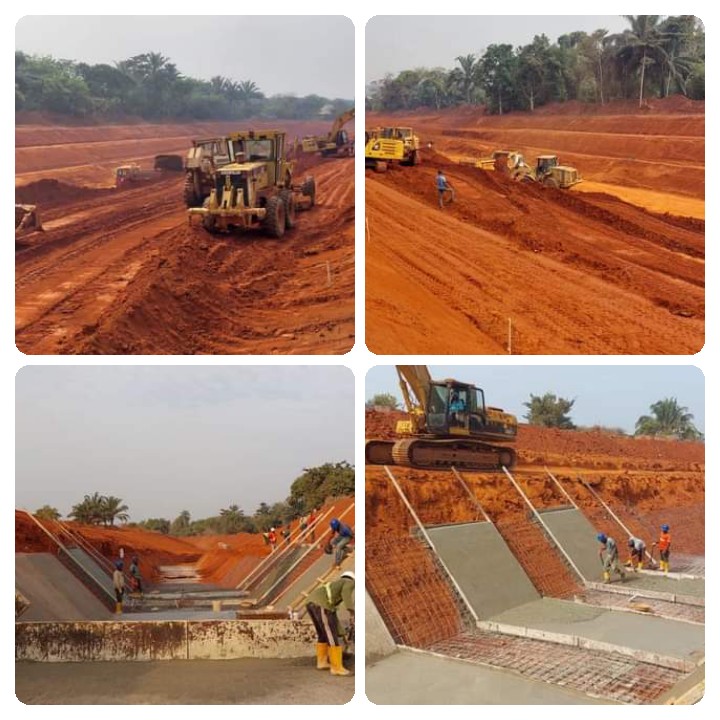 According to the Chief Press Secretary to the Governor of Kogi State, Onogwu Muhammed, the people of Ogane-aji in Anyigba, Dekina Local Government Area of Kogi State can now heave a sigh of relief as the partnership of the Kogi State government and NEWMAP is currently addressing the age-long erosion menace in the area.

“The gully erosion in Ogane-Aji which is about 800m in length, has a width varying from 30m to 35m and depth ranging from 10 to 16m. The gully erosion as a result of abandonment by previous administrations later developed fingers, consuming lives and causing gargantuan destruction of property of the people of the area.

“As a result of heavy rainfall, it claimed about four lives in 2015 alone and overall, not less than 19 persons have been killed by the gully erosion at Ogane-aji, Anyigba, Dekina Local Government Area of Kogi State.

“The erosion in Ogane-Aji is as old as the community and older than Kogi state which has been governed by seven governors (4 military and 3 civilians) before the incumbent governor Yahaya Bello came onboard in 2015.

“In 2014 when the erosion claimed not less than 4 persons during the raining season, former governor Captain Idris Wada flagged off Ogane-aji erosion control and land reclamation but no work was done at the site before the end of his administration.

“The government of Capt Idris Wada entered into an agreement with the Nigeria Erosion and Watershed Management Project, NEWMAP to address ecological and environment degradations in Kogi State. Due to lack of fund for the state to pay her counterpart fund as part of the contractual obligation, the NEWMAP could not take effect in Kogi State.

“On the 17th of June, 2017, the government of His Excellency Yahaya Bello keyed into this agreement and signed the Memorandum of Understanding with the World Bank and in matching action with words, governor Bello approved the disbursement of One Hundred Million Naira to the World Bank in partial fulfillment of the state government’s counterpart funding.

“In 2019, the state government under the able leadership of Governor Yahaya Bello paid Nine Hundred Million Naira being the state’s counterpart funding of the NEWMAP project in the state and between 2019 and 2021, Erosion control and land reclamation at Adumu in Olamaboro local government area of the state has been completed.

“In all, three erosion sites at Adumu in Olamaboro, Anyigba in Dekina and Agasa in Okene local government areas are been professionally addressed with the World Bank contributing $500m and the state government fulfilling the payment of her counterpart funding.

He said the story is also to highlight how World Bank projects through her relevance agencies are funded and executed in states.

His words, “World Bank, established in July 1944 and Kogi State, created in 1991 (30 years ago), governed by 7 governors before the incumbent have had no partnership in Erosion and other Ecological control agreement. NEWMAP, had no project in Kogi state between 2010 and 2016 due to inability of the state government to pay her counterpart funding obligation but under the leadership of Yahaya Bello, over $900m projects have been executed in the state. This is because, the government of Kogi State under the leadership of Alhaji Yahaya Bello has demonstrated transparency, accountability and probity in the management of scarced resources for the maximum benefit of the people.

“It is on this note that in July 2021, the World Bank commended governor Yahaya Bello for refunding $4.63 million surplus funds under the NEWMAP.

“In a letter of appreciation signed by its Regional Director, Shubham Chaudhuri, the World Bank described the step taken by the governor as a sign of good leadership.

“According to the World Bank, the action by the Governor has made it possible for the organisation to extend its projects to othersStates facing deficit funds and to extend the closing date of its projects.

“On the 17 of November, 2021 the governor also received another letter of commendation from the World Bank for transparency in Audited Financial Statement.

“The government’s transparency, accountability which is attracting foreign partners to address development challenges in the state worth commendation and appreciation.