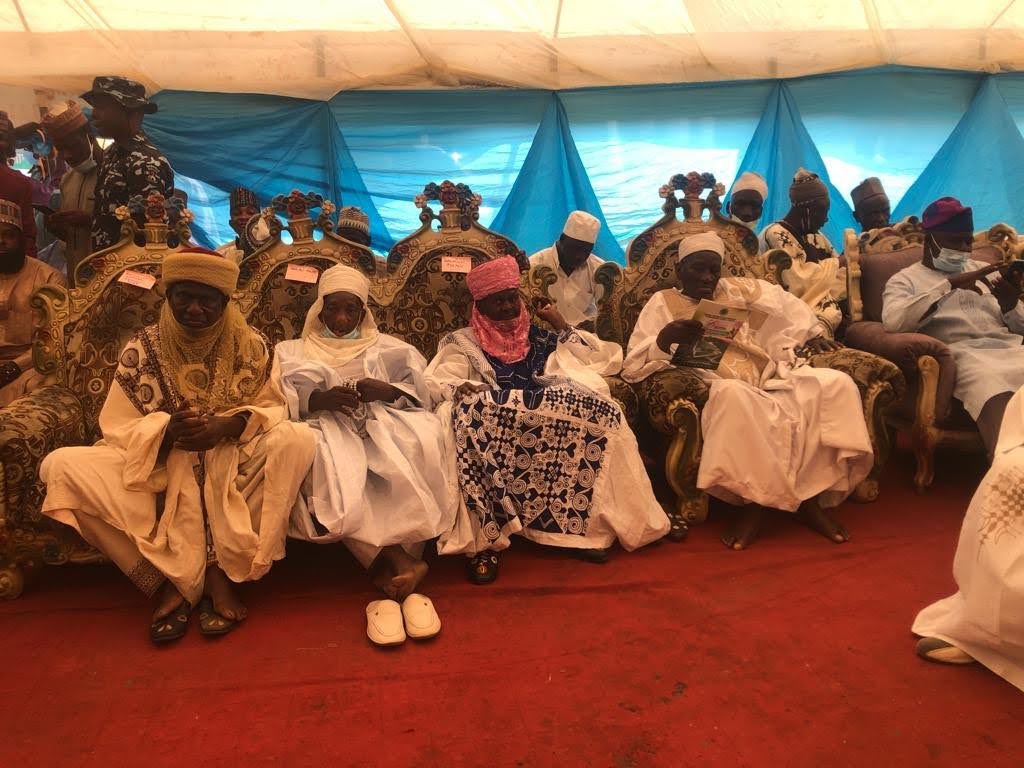 Unprecedented crowd on Saturday gathered at the forecourt of the palace of the Emir of Ilorin, Alhaji Ibrahim Sulu-Gambari to witness the 56th annual conference of Ilorin Emirate Descendants Progressive Union (IEDPU).

Stalwarts and supporters of the ruling All Progressives Congress (APC) in the state, had as earlier as 8.00 am took positions at the expansive venue of the conference, waiting patiently to receive the Kwara State governor, AbdulRahaman AbdulRazaq who was the special guest of honour at the event.

The governor, in company of the chairman of the occasion, Senator Ibrahim Yahaya Oloriegbe, commissioners and special advisers, arrived at the venue of the event at 9.55am, five minutes to the commencement of the programme.

The governor and Senator Oloriegbe immediate proceeded to the palace to pay homage to the Emir and later accompanied the monarch to the venue of the event.

The governor was received into the arena with thunderous shout of ‘Sai Ramoni, ‘AA for second term’ by thousands of his supporters and admirers.

Delivering his address, the IEDPU president, Alh Aliyu Otta- Uthman
poured encomiums on the governor for making the take off of the Police College, Ballah, a reality and for fulfilling his monetary pledge towards the construction of the union’s skills acquisition centre.

” It’s gratifying to commend the courage of the government of Kwara State, but for its doggedness, the story would have been different today. The formal handing over of of the school by the Kwara State government to the Nigeria Police was done at a colourful ceremony presided over by Governor AbdulRahaman AbdulRazaq on Tuesday 14th December, 2021,” he added.

Otta- Uthman cautioned the indigenes of Ilorin emirate against selling their family lands, advising them to go for leasing arrangements instead.

The chairman of the occasion, Senator Oloriegbe, urged IEDPU to synergise with the state government in its efforts at making the youths of Ilorin emirate computer literate and self- reliant.

Also speaking, the Emir of Ilorin, Alh Ibrahim Sulu-Gambari, urged the residents of Ilorin and the state as a whole to continue to live in peace and harmony.

In his remarks, Governor AbdulRazaq said his administration has continued to partner with the IEDPU to ensure that the capital city Iives up to the billing.

He expressed delight that:” Today, Ilorin is clearly the fastest growing economic centre in the north central region (after Abuja) with more than eight daily flights in and out of it. This attests to the increasing viability of the town and the level of peace and harmony it enjoys. I thank the security agencies, the Emir and the entire traditional council for their support”.

AbdulRazaq added:” We are putting many things in place to secure the place of Ilorin as a major hub in Nigeria. The Ilorin international conference centre, the oncology centre, the eight-wing squash court, the garment factory, the Ilorin innovation hub, and the visual arts centre are all major signature projects that will drive huge economic traffic to Ilorin and Kwara State as a whole.”