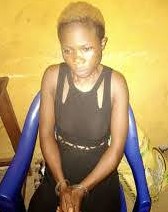 A 25-year-old girl, Dominion Okoro, who allegedly murdered mother of former Edo State governor, Maria Igbinedion, opened up and said she hit a stool on the 85-year old woman’s head while trying to steal from her.

She disclosed this while being paraded by the Edo State Police Command.

Dominion said she entered into her room and made an attempt to steal her N100,000, gold necklaces and a wristwatch.

She said when she saw that the deceased saw her while trying to steal the items and wanted to raise an alarm, she quickly hit her head with a stool and she died immediately.

Okoro who was housemaid to the deceased at the time, said that when she saw that she had died, she quickly took her belongings and ran to stay with her elder sister in Cross River State.

“I am here because I killed somebody. Nothing happened between us. Myself and my madam never had any quarrels. I have been with my madam for one year and three months before this thing happened”, she said.

When asked how much she stole, she said “I wanted to take her money from her drawer. It is only a N100,000 that I found in the drawer.

“I took her gold necklace and wristwatch and ran to stay with my elder sister in Cross River”, Okoro added.