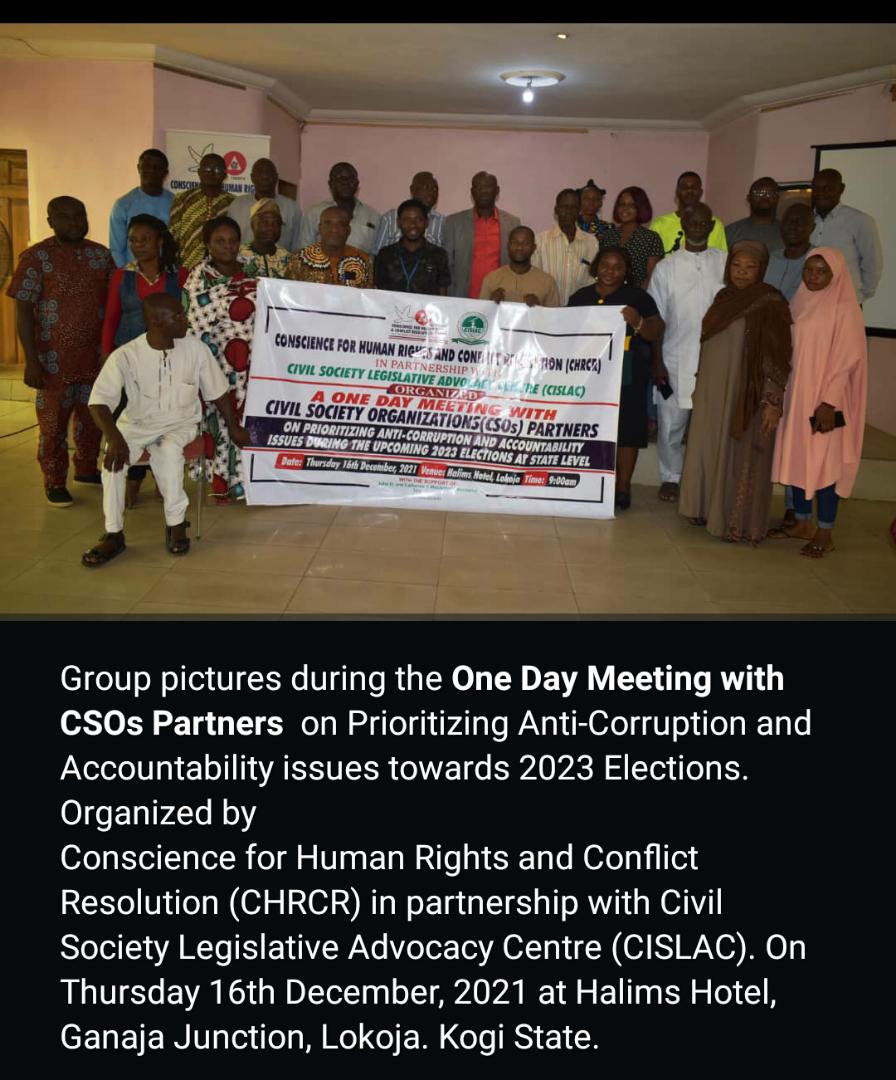 A Civil Society Organization (CSO), Conscience for Human Rights and Conflict Resolution (CHRCR), has urged political parties to develop specific agenda in their manifestos to promote Anti-corruption and Accountability issues towards the 2023 elections.

The Executive Director of CHRCR, Idris Miliki Abdul, made the call on in Lokoja, at a one-day meeting with Civil Society Organizations (CSOs) Partners on ”Prioritising Anti-Corruption and Accountability Issues During the Upcoming 2023 Elections At State Level”

The meeting which was organised by CHRCR in partnership with Civil Society Legislative Advocacy Centre (CISLAC), was aimed at reducing corruption in Nigeria by educating and mobilising citizens groups and galvanising support for anti corruption among political parties.

Miliki stressed the need for political parties, frontline candidates and critical interest groups and networks involved in the 2023 electoral processes to have specific agenda for anti-corruption and accountability crusade.

He also advised political parties to have a deliberate policies that would ensure gender inclusion in politics.

He urged the CSOs, citizens to demand reforms towards improving electoral accountability as well as call for more participation of vulnerable and marginalised groups like women, youths and persons living with disabilities.

”Frontline political parties and candidates in target states must prioritise anti-corruption, accountability and inclusion reforms and commitments in their manifestos and political campaign promises through officially commitments during interactive sessions, town hall meetings and other interface with voting groups.

”We must monitor the effectiveness of upholding affirmative action and social inclusion in the political parties.

”Demand for gender and social inclusion in the electoral and constitutional reform process at the state level, affirmative action and social inclusion on the platform of candidates and political parties including appointive positions, demand for the implementation of the existing laws,” he said.

He appealed to the media to be courageous, investigate and make pronouncement with accurate reportage without fear or favour towards curbing corruption and enshrine accountability in the society.

He urged Gov. Yahaya Bello, to use his power and influence to make sure that three women were elected into Kogi State House Assembly in 2023 elections in continuation of his support for affirmative action in the state.

He urged Kogi State Independent Electoral Commission (KOSIEC) to make public the results of the Local Government election results described the activities of the commission as far from being accountable and laced with corruption.

He added: ”Being unable to produce the results of the LG election after almost one year is a fraudulent and corrupt election, the citizens of the state must rise up and demand for their rights”.

Miliki appreciated the continued support of Mac-Arthur Foundation, CISLAC, the media in Kogi State, civil society and the goodwill we enjoyed among the general public in the State, and asked for more continuous support and collaboration.