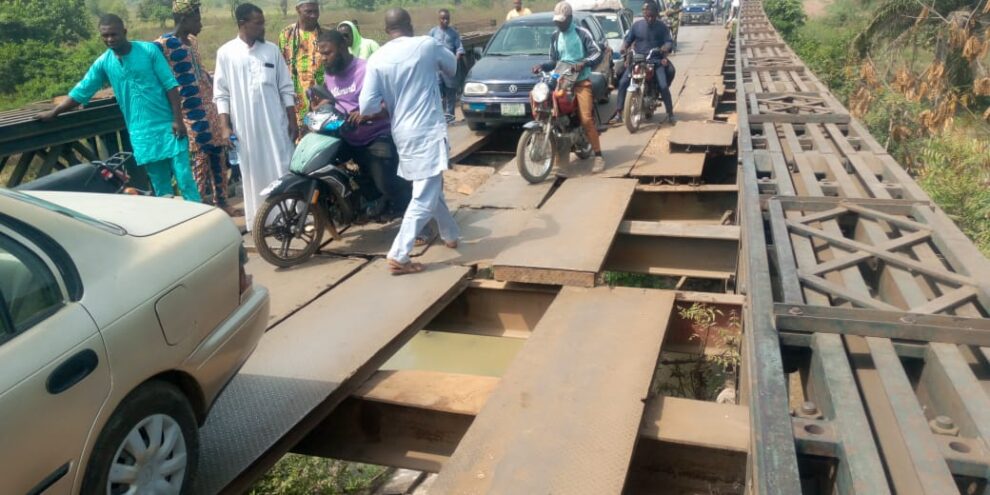 Members of the National Union of Road Transport Workers (NURTW) and its counterparts in the Road Transport Employee Association of Nigeria (RTEAN) on Monday in Ilorin protested over the neglect of the Moro bridge in Asa local Government Area of the state.

The bridge, a colonial construction, has served the people of the state for several decades and connects Kwara with Igbeti in Oyo State but now in the verge of collapse.

Although the construction of a new bridge to replace the colonial structure was awarded in 2017 by the Federal Government, the project was yet be to completed.

Motorists, transporters and pedestrians, majority of whom are farmers, held a protest where they lamented the negative impact of the neglect of the Federal Government bridge on their businesses and farming activities.

Addressing newsmen during the protest, the Kwara RTEAN chairman, Alhaji Olayinka Onikijipa called the attention of the federal Ministry of Works and Housing led by Mr Babatunde Fashola to the suffering of the people of Kwara on the failure in the completion of the new bridge.

According to him, the unions and the people of the state are very displeased with the present situation.

“The construction work has been abandoned since 2018. It may interest you to note that the “Construction of Moro Bridge on Ilorin-Igbeti Road was awarded on 22-Mar-17 to Bilijoe + Berger, Contract Number 6311.

“This has imposed a lot of hardship on the people and especially the transport workers and farmers who are in the majority here.

“The colonial structure has almost collapsed causing unimaginable hardship to all us”, he added.

Alhaji Onikijipa therefore “passionately appealed to the Federal Ministry of Works and the Minister Babatunde Raji Fashola to direct the contractor to go back to site without any further delay.

“Our people are suffering. We beg the Minister to come to our rescue now to save our businesses from collapse”, he added.

On his part, the state chairman of the NURTW, Alhaji Abdulrazaq Ariwo-Ola said the unions have been involved in palliatives measure to make the bridge passable.

Ariwo-Ola who said the bridge had claimed lives in the past called for drastic and urgent action to forstall further casualties on the bridge by completing the new one.

“We appeal to the Federal Govement on the devastating condition of the Moro bridge that connects the only road to Chikanda in Kosubosu, Kaiama Local Government Area to the border.

“Many lives have been lost becuase of the poor and worrying condition of the bridge which has now turned to a death trap”, he added

TagsNURTW protest over neglect of Moro bridge in Kwara