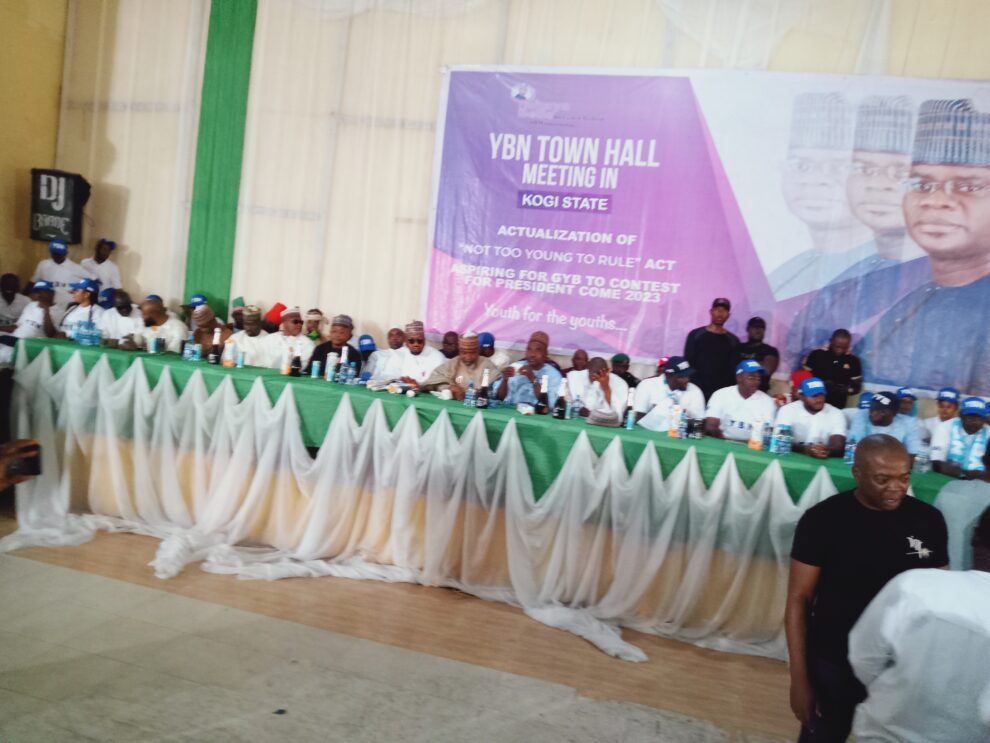 Thousands of youth from North-Central under the aegis of Yahaya Bello Network (YBN) have endorsed Gov. Yahaya Bello of Kogi for the 2023 presidency saying that only through him would the Nigerian dreams of unity, safety and economic advancement be achieved.

The youths who besieged the state capital Lokoja in a town hall meeting organised by the YBN on Tuesday said that the unity of the country, security of lives and property as well as its economic prosperity were paramount.

The Convener and National Chairman of the (YBN), Alhaji
Abdulrahman Muhammed from Kano state said the Network was out to ensute actualisation of “Not Too Young To Rule” Act and to Urge Gov. Bello to contest the 2023 President race.

Kwashewa noted that the governor had proved his mettle as a capable leader in Kogi and capable of leading the country out of the woods who would deliver the country from its numerous challenges.

He said that God had blessed the people of Kogi State for giving them a leadership gem as Gov. Bello saying, “God has blessed this state with a pragmatic leader and the youngest governor in Nigeria.

“I have never seen a leader that cares so much about the welfare of youths. He has the largest number of youths more than any other state in this country”, he said.

Kwashewa commended Gov. Bello’s stance on the Covid-19, youth indulgence in governance and security of the state saying, “There was crisis of insecurity in the state before he took the mantle of leadership and today, Kogi is one of the safest states in the country.

Also speaking, Alhaji Abdullahi Bello, Kogi State Chairman of the All Progressives Congress (APC) said history was being made in Nigerian political terrain with the youths now taking their destiny in the hands to support one of their own.

Abdullahi said that Yahaya Bello presidency would ensure adequate reward for hardwork, excellence and dedication adding that the country’s leadership over the years had lacked a good rewarding system.

Alhaji Ahmed Mohammed, Deputy Speaker, Kogi House of Assembly commended the convener of YBN for the evolution of the group cutting across states in Nigeria.

He said, “Our priority as Kogites is to see Governor Yahaya Bello becoming the President because of the quality leadership in him.

“With him, the Nigerian dream will come true. Our body language, thinking and dream is Yahaya Bello and our dreams shall come true and become a reality.”

Dr Folashade Arike Ayoade, Secretary to the State Government (SSG) described the aspiration of Gov. Yahaya Bello as timely in view of the prevailing challenges assailing the country saying, “We are grateful to God for giving Bello to us at this time.”

However, the townhall meeting also featured the inauguration of Kogi State executive council of the YBN.