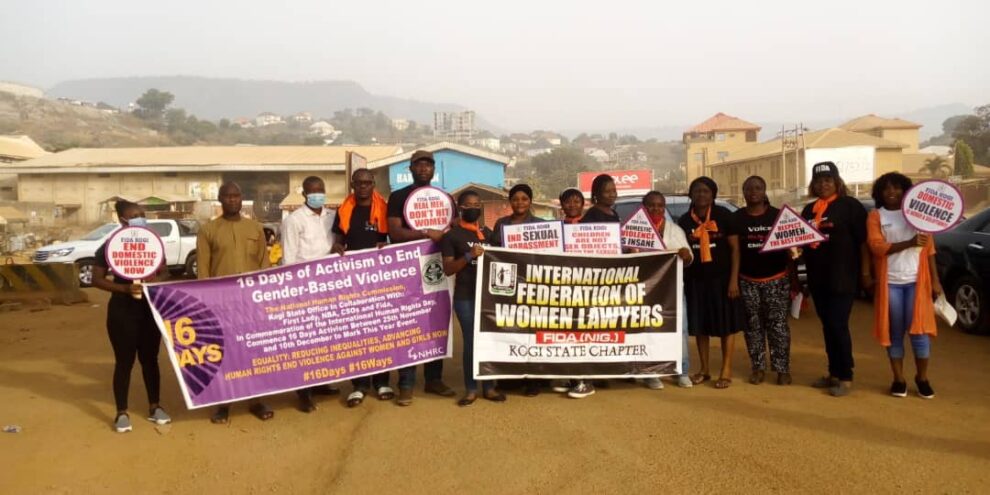 The Internal Federation of Women Lawyers (FIDA) Nigeria, Kogi state branch, on Monday embarked on sensitisation and awareness campaign on curbing domestic violence and sextual harassment against women and children.

The Chairperson of FIDA, Kogi State branch, Mrs Lilian Ajuma Okolo, during the sensitisation campaign at Ganaja junction in Lokoja, told newsmen that FIDA remained committed to raising the standard of women and children’s rights in the state.

Okolo said the sensitisation was organised by FIDA Kogi to commemorate this year’s ”16 Days of Activism to End Gender-Based Violence”, from Nov. 25 to Dec. 10, 2021, tagged: ”Orange the World: End Violence against Women Now!”.

She urged the people to join FIDA and other stakeholders to unite and collectively stand against any form of domestic violence against women and children, and report cases to FIDA office.

”In this light, we have come out today to sensitise the general public and to call on all stakeholders to help in the campaign to stop violence against women”, she said..

She thanked His Excellency, Governor Yahaya Bello, for giving women a level playing ground in the state, while appealing to him to assent the Violence Against Persons and Prohibition Bill and passed it into law.

”We thanked the Attorney General and Commissioner for Justice, Kogi State, Ibrahim Sani Muhammad SAN, for his support which had made this year a laudable one for us in Kogi FIDA, and all the stakeholders in the justice sector including the Chief Judge”, Okolo said.

She stressed that FIDA’s goal is to ensure that vulnerable groups are protected, and providing channels devoid of obstacles using their professional skills to support them.

Members of FIDA Kogi during the sensitisation campaign, carried placards with various inscriptions, such as ”Domestic Violence is Insane”, Children Are Not Sex Objects, Stop Sexual Molestation”.

ALSO READ:  How Sanwo-Olu's Lagos State Is Changing Percentage Narration From 100% To 1000% Through Performance In Nigeria.