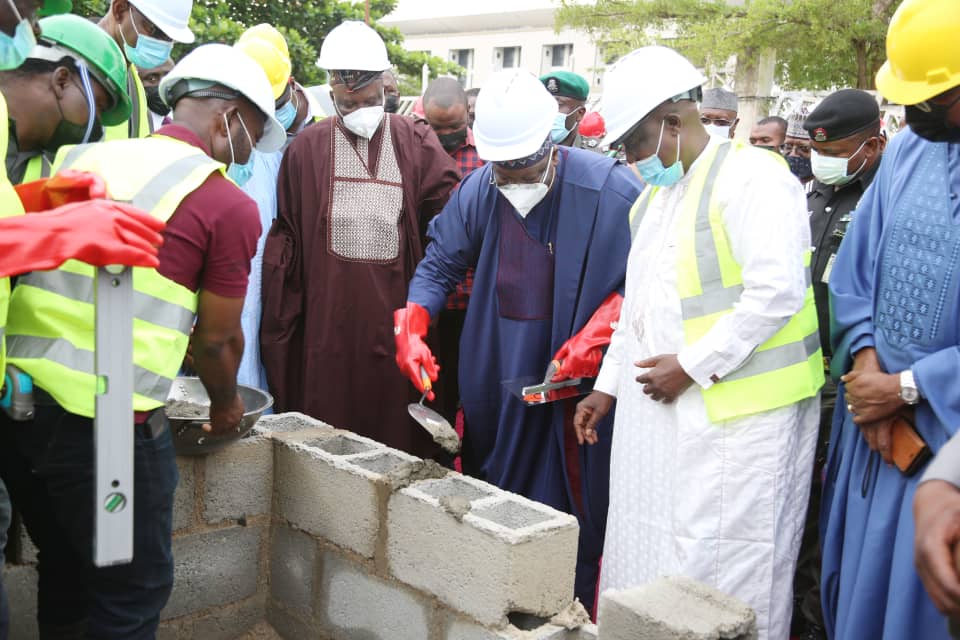 It was precisely on Wednesday,October 20th,2021 that had gone down memory lane, after what was perceived to be impossible became a reality, with the ground breaking ceremony of the permanent office complex of the National Assembly Service Commission NASC, with an initial cost of over 11 N Billion located in the heart of three arms zone of the Assembly.

This will bring to an end a journey of over two decades that started from the small office at the federal secretariat,to a flat in Wuse 2 and now to the Utako office of the commission laced with un conducive environment for official transactions.

The ground breaking event witnessed by the President of the Senate and chairman of the National Assembly,Dr Senator Ahmad Ibrahim Lawan has also in audience,the Speaker of the House of Representatives,Rt Honourable Femi Gbajabiamila for the all important occasion.

During his address,The President of the Senate reiterated the commitment of the 9th Assembly to the provision of needed infrastructure that will enable the commission deliver on it’s mandate.

As the hub of staffers of the National Assembly who are expected to report directly to the commision,it had passed through a lot of administrative inconvenience passing information to and fro the National Assembly, with the distance that is involved from the three arms zone to the Jabi area of the Federal Capital Territory.

This was also compounded by the location of the current NASC office at Jabi, that is wholly a residential area,coupled with huge amount of money being expended on the yearly rent payment by the management of the commission.

The current strides by the management of the commission was a dream come true, especially going by the paucity of accommodation both for the staffers and leadership of the commission overtime that needed to be redressed.

The National Assembly Service Commission NASC Chairman, Engineer Ahmed Kadi Amshi FNSE who appeared fulfilled in his dream with the ground breaking ceremony said it was a dream come to reality, after 20 years of the existence of the commission.

He was elated that the event took place in the life of the 9th National Assembly under the leadership of Ahmad Ibrahim Lawan and Rt Honourable Femi Gbajabiamila, both as the Senate Presdent and Speaker House of Representatives.

ALSO READ:  Senator Adeyemi exercising his wealth of experience, legislative prowess at the floor of the Senate.

Kadi said his joy knew no bound after 20 consecutive years of it’s existence,a permanent office with modest equipment was now under construction in the current dispensation.

He paid glowing tributes to the success recorded on the construction of the new permanent office complex to the two great champions of democracy,The Senate President and The Speaker,House of Representatives.

Engineer Ahmed Kadi Amshi FNSE stated that the planning process that started in 2010 with the appointment of ‘TRIAD ASSOCIATES’ as consultants for stage 1,2 and 3 of the project.

Having completed all the preliminary process of Architectural,Civil and Structural,Electrical , Mechanical engineering services including Quantity survey.

Other areas are preparation of working drawings,Technical and Engineering specifications,Bill of Quantities, preparation of tender documents and contract conditions.

He said the previous assemblies could not award the project due to non budgetary provision until 2021 under the 9th Assembly.

The chairman who expressed confidence on the ability of the contractors,Strabic Construction Limited was keenly selected among numerous bidders to the job owing to their experiences,technical and financial capabilities.

According to Engineer Ahmed Kadi Amshi,the project is expected to be completed in two years but could come earlier than then,with availability of funds.

ALSO READ:  KOGI POLITICS: TWENTY-TWO (22) YEARS AFTER WHERE IS OGORI/MAGONGO IN THE HOUSE OF REPRESENTATIVE EQUATION ????

Kadi clarifies that 3 Billion was allocated in the 2021 capital budget for the new NASC complex,for mobilisation less than 30% required by law,but owing to the understanding and determination of the contracting firm to deliver on time.

He used the occasion to appeal to the National Assembly management to provide the balance of 10 Billion in the 2022 budget,so as to enable them commision the project before the expiration of the current 9th Assembly.

The chairman thanked the staffers of the National Assembly Service Commission NASC for their cooperation,other management staff of the bureacratic arm of the Assembly, that witnessed the historic occasion.

With this positive developement,history is already being made in the life of the 9th Assembly under the leadership of the Chairman,National Assembly Service Commission NASC, Engineer Ahmed Kadi Amshi FNSE.

The over 11 Billion Naira new commision headquarters being constructed in the heart of the National Assembly by the three arms zone, will bring the staffers both physically and in spirit to the fold of National Assembly.

2021 AFCON: Guinea’s Military President demands a refund of the money they invested on the national team

BOLA TINUBU AND HIS DATE WITH DESTINY IN 2023

IMAAN; Managing Humanitarian Crises In Nigeria For An Egalitarian Society.
FULokoja: When corruption-variants attempt to fight back
Comment