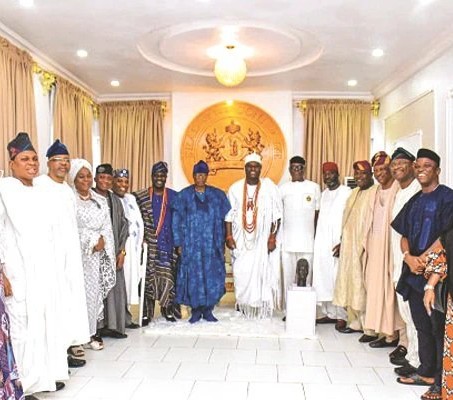 Some prominent Southwest leaders met behind closed doors  yesterday at the palace of  the Ooni of Ife, Oba Adeyeye Ogunwusi over the state of the nation.

The Nation gathered that the  meeting  had in attendance, about 30 persons, including Senator Abiodun Olujimi;  Akin Osuntoun, a former political adviser to ex-President Obasanjo Obasanjo and a former Peoples Democratic Party Governor candidate for Lagos State, Jimi Agbaje.

Alao, who is the Olugbon of Orile Igbon,  explained that the meeting was originally convened to discuss national developments but had to delve into Igboho’s arrest,

He said: “The essence of our meeting is a call by the Ooni of Ife, Oba Adeyeye Ogunwusi  that we need to come back to our roots and do things the way we use to do it successfully.

“A lot of things have gone wrong in the last few years in this country, politically, economically, socially, and we want to put things in the right perspective, that is the essence of this meeting. “Coincidentally, Sunday Igboho was part of what was discussed. We did not ignore the issue but it was not the main issue we discussed.

“We need to be at the forefront of what is happening in this country? We are going to make wider consultations whereby individuals, groups, and others will be carried along to put things in the right direction.

“ We cut across the Southwest states at the meeting. We are going to make wider consultations with monarchs. It is time for us to get it right..”