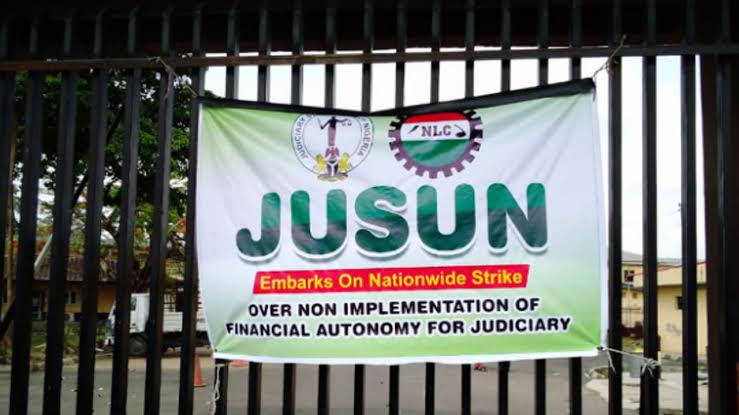 The courts across the states of the federation will be re-opened with immediate effect and all judicial activities begin as the Judiciary Staff Union of Nigeria (JUSUN) announced the suspension of its three-month-old national strike Wednesday evening.

The suspension of the strike, which has paralyzed court activities nationwide since Tuesday, April 6, was announced after the meeting of the National Executive Council (NEC) of the union, held in Abuja.

However, in suspending the strike, the union called on the National Judicial Council (NJC), the Presidential Implementation Committee, Attorney General of the Federation, Accountant-General of the Federation and all stakeholders to see that the issue of Judiciary Financial Autonomy is finally laid to rest as provided for in Section 81 (3), 121 (3), and 162(9), of 1999 Constitution as amended.

JUSUN pointed out expressly that it suspended the strike due to the intervention of NJC, other stakeholders and in consideration of many issues.

“NEC-in-session discussed extensively and after putting so many issues into consideration i.e. the intervention of NJC and other stakeholders, the NEC has resolved that the strike is hereby suspended.” A communique issued at the end of JUSUN NEC meeting said.

The communique signed by the Deputy President, Comrade Emmanuel Abioye and the General Secretary, Comrade Isaiah Adetola commended the Chief Justice of the Federation and all heads of Courts for their patience and understanding throughout the period of the industrial action.

It also commended the effort of the NJC in making sure that the governors obey the Memorandum of Action (MoA), Judgment and agreement on the Financial Autonomy of the Judiciary.

It said: “NEC-in-session commends the NWC/NEC and all JUSUN members for all their sacrifice, understanding and patience.”

The NEC-in-session condemned the actions of the governors of Kaduna, Plateau and Benue States for withholding salaries of Judiciary in their various states for months and urge all governors involved to do the needful.

The communique read: “NEC-in-session agreed that there shall be the introduction of peculiar allowance throughout the State and Federal Courts.

“NEC-in-session frowns at the deduction of salary of JUSUN members of Bayelsa State and request that the deducted sum be restored forthwith.

“NEC- in- session unanimously reiterates that no member of JUSUN should be victimized on strike action.”
Tribuneonline