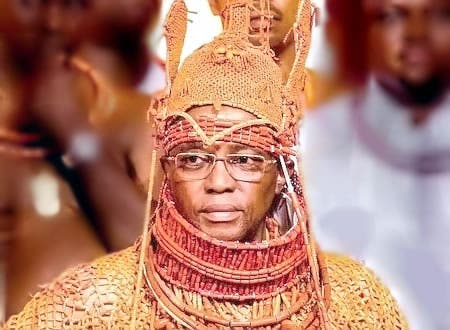 The Oba of Benin, Omo N’Oba N’Edo Uku Akpolokpolo, Ewuare II, has said that for any society to be corruption free, its judicial system and institution must be financially independent and be in full autonomy.

To that end, the Benin monarch called on governors of the 36 states of the federation through the Nigeria Governors Forum (NGF),  to ensure full autonomy for the judiciary in line with the provisions of the constitution.

The Omo N’Oba made the remarks, late Thursday, when he received the outgoing Chief Judge of Edo State, Justice Esther Edigin, who led top members of the bench alongside her husband, to formally inform the Oba of her disengagement from civil service.

Oba Ewuare II stressed that for equity and true justice to prevail in the country, “the judiciary should not be intimidated or subjected to all kinds of ill-treatment before approving fund for its operation”,  insisting that the country would not move forward without full financial autonomy for the judicial arm of government.

Earlier in her remarks, Justice Edigin had informed the monarch of her official disengagement from active service, attributing her success in office to the prayers of the Oba.

The retiring chief judge commended the oba for his fatherly roles in  repositioning Benin kingdom.
Tribuneonline

TagsOba of Benin calls on NGF to ensure autonomy of judiciary

Why I slumped at the Presidential Villa — EFCC Boss