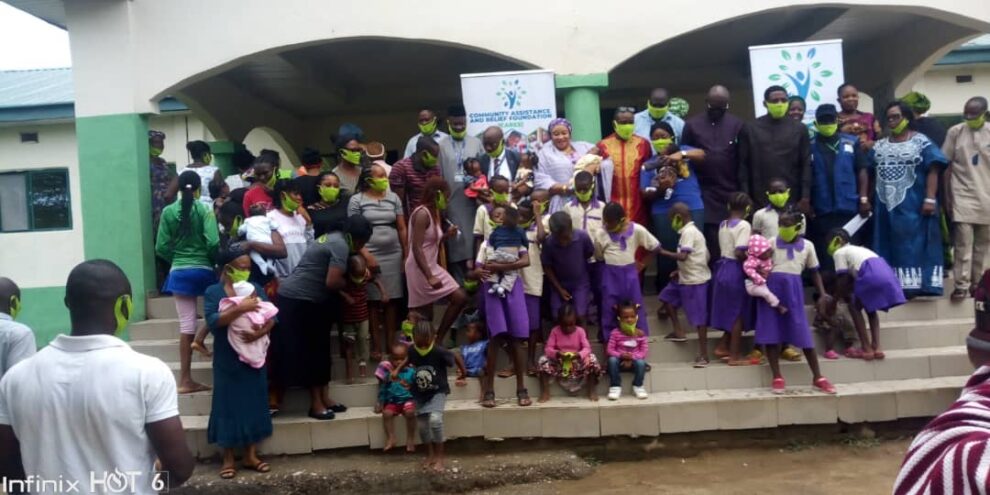 A Non Governmental Organisation, Community Assistance and Relief Foundation (CARES), has donated relief items and provided water facility to some orphanages in Kogi communities as away of alleviating the suffering of the less privileged children in communities

The items were donated to Ministry Of Mercy (MOM) and Stagi Cornerstone Orphanages, both located in Lokoja community which includes food items, beverages, face masks hand sanitizers, among others.

A water reservoir was also constructed and donated to MOM orphanage to solve their challenge of water scarcity.

Speaking to journalists after the donation in Lokoja, the foundation’s Executive Director, Mrs Bolanle Bola–Olorunsaiye, noted that CARES has been providing financial, material and moral aids to less privileged ones in the communities.

She added that the foundation were also assisting the indigent and vulnerable people in the communities through sustainable economic, social and financial plans.

”Our concern is to lift the indigent and poor family out of poverty. If we take this orphans out of the road we believe that insecurity will reduce in Kogi State and the nation at large”, she said.

She stressed that lifting the poor out of poverty would reduce insecurity in the communities, thereby creating a peaceful environment for businesses to thrive.

According to her, the NGO is also creating awareness and sensitise rural dwellers on opportunities that hitherto remains a mirage, and serve as bridge between communities and government agencies, professional and international bodies.

In her remarks, the Kogi State Commissioner of Women Affairs and Social Development, Hajia Fatima Buba, commended the CARES foundation and AHF for impacting the lives of the less privileged and vulnerable people in the communities.

Buba urged well to do members of the society to help in bridging the gap between Government and the people, saying that Government alone cannot do it all.

She noted that the administration of Governor Yahaya Bello has been doing its best to better the lives of the vulnerable people through empowerment and appointments.

On his parts, the Director General, Kogi State Public Defender and Citizens’ Rights Commission, (PDCRC), Barr. Abdullahi Zakari, emphasised the commitment of Gov. Yahaya Bello, to promote, protect and enforce the rights of the less privileged and vulnerable in the state.

The National Chairman of Forum of States’ Health Educators in Nigeria, Alhaji Yusuf Acheku, sensitised the children on how to keep and maintain healthy personal hygienes to avoid sickness and diseases.

In their separate comments on behalf of their NGOs, Mr Daniel Eden of MOM orphanage, and Rev. Samson Eseyin of Stagi Cornerstone orphanage, both appreciated CARES and AHF for the kind gesture.

They further promised to make judicious use of the donated items, while soliciting for more support so that the children could be well taken care of.