Sustainable Development Goals SDGs is an offshoot of Millennium Developement Goals MDGs powered by the developed countries to mitigate the dearth of underdevelopment.

Over the years the primary focus of the global intervention agency is to bridge the wider gap of underdevelopment and social dislocation between the urban settlement and the critical settlers of rural dwellers.

This had being the focus of SDGs Management under the supervision of Princess Adejoke Orelope-Adefulire new template of addressing the dearth of social, infrastructural and economic development of ordinary Nigerians.

Inline with the global target of meeting up the 17 goals outlined by the world bodies, SDGs in Nigeria had made a remarkable impact on the lives of both the rural dwellers as well maintain the status of urban settlers.

For Mrs Adejoke Orelope-Adefulire, it is a familiar terrain,coming from a multi ethnic and cosmopolitan Lagos State as Commissioner on poverty alleviation to Deputy Governor of the state,she needs the enabling environment to prove her mettle,which led to the positive current score card.

From 2016 till date,the helms woman at Nigeria SDGs, had operated inline with the global agenda, not only to ensure the implementation of the basic goals,but monitored it’s workability.

She ensured the provision and promotion of primary health care as a departure to rural health care system to ameliorate the growing health challenges in the rural areas, that preclude ruralites from distinguishing different degree of ailements,even though,she made giant strides in the provision of medical equipments to secondary health institutions.

Rural areas now enjoy more provision of electricity to various villages across the country,with efforts of the SDGs both through intervention,initiation and conviction of Lawmakers to invest in infrastructure.

Princess Adejoke Orelope-Adefulire did not relent in opening up rural roads through grading and construction of roads,a routine project year in year out on the template of SDGs program,this developement had asissted rural dwellers who are predominantly farmers in movement of their products from the farm to the markets,as well ease of movements to and fro from the various villages in Nigeria.

Provision of adequate fertilisers and other farm imputs had been the focus of the new SDGs,as all year round round,efforts is always in place to reach both the rainy and dry season farmers with fertilisers.

According to analysts,water they say is life,so the idea of provision of portable drinkable water both for domestic and other services was the cardinal objectives of the SDGs.

In the last four years, provision of portable and drinkable water to the rural areas has hit the top roof,as villagers no longer depends on stream water,well water or any other form of water both for consumption and domestic activities.

Having achieved this feat, the incidence of water borne diseases,all other ailements arising from the consumption of contaminated water in our local communities had become a thing of the past in Nigeria.

Since Education is the basic cardinal objectives of the SDGs, by it’s intent to wipe out illiteracy,poverty and underdevelopment,the current leadership has done a lot to eradicate the growing scourge, by giving adequate attention to provision of books,instructional materials, construction of schools , laboratories and library both in the rural and urban areas of Nigeria.

The SDGs leadership in Nigeria has put in place a robust gender parity programs that will address gender inequality among the people,as well as bridge the gap of galring disparity between male and female.

This decision was occassioned by the synergy between the legislative arms of government,consisting of the Senate and House of Representatives committee on SDGs.

The inclusion of NYSC members along with 17 iconic leaders showed the efforts of the current SDGs leadership and focus on grassroots developement, as propagated between 2020 and 2030.

In recognition of the efforts of Princess Adefulire,Nigerian President says having achieved alot in the previous decade,the program will now focus on economic development and recovery, agricuture,mining in the post COVID-19 era.

The NYSC and the iconic leaders will champion more grassroots developement through the 17 goals of the SDGs as ambassadors.

This bring to bear,the importance attached to the program between 2020-2030 in the implementation of the program in the rural areas.

According to the President,more attention will be given to SDGs through appointment of sub National authorities to train SDGs champions.

This developement gave impetus and encouragement to efforts of the current leadership to refocus the activities of the global agency geared towards more impelementation of it’s laudable program with rural areas as target.

The expression of satisfaction in the last few years, SDGs had domesticated it’s programs in line with government expectations, even though the COVID-19 pandemic was a serious threat to it’s programs,yet not surmountable.

Inline with the second Voluntary National Review highlighted efforts to meet SDGs targets on the critical issues of poverty and an inclusive economy; health and well-being; education and gender equality; enabling environment of peace and security; and partnerships.

Though,the targets were based on current development priorities, as captured in the Economic Recovery and Growth Plan (2017-2020), as well as the Medium Term National Development Plan (2020-2025) championed by SDGs leadership.

This had occassioned the mainstreaming of SDGs programs into subsequent developement plans of Nigeria government.

The vision to implement unique initiatives such as the re-aligned National Statistical System to effectively track and monitor the implementation of the SDGs on annual basis is also being rolled out.

The current SDGs under Princess Adefulire has laid a solid foundation through domestication of planning model across 36 states,scales up National social Investement program(NSIP), to reach to the vulnerable so as to lift about 100 Million out of poverty in the next one decade, through engagement of all facets of the society using SDGs.

Yusuf Writes From Abuja And Is A Public Affairs Analyst. 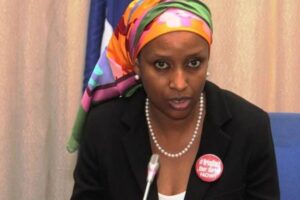